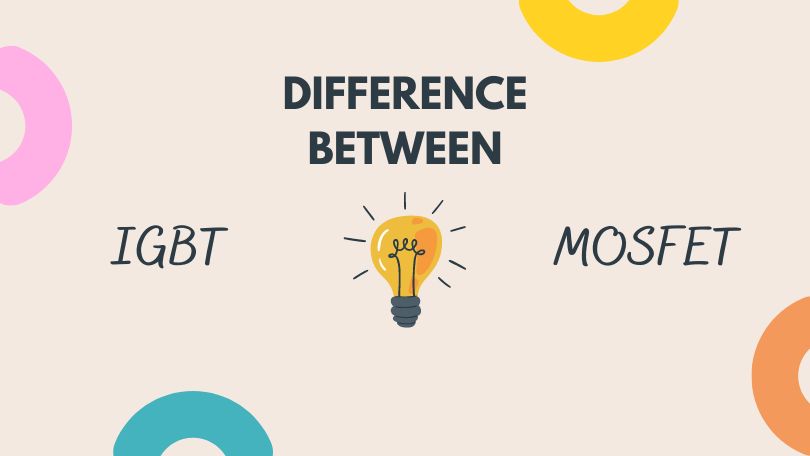 Bipolar transistors enjoyed the monopoly of providing real power transistors until MOSFETs came along in 1970. Bipolar transistors have gone through changes to improve their electrical performance after being created in 1947. It is widely applied in electrical circuits. They, however, have lost touch when it comes to turning off characteristics and exhibiting negative temperature coefficients that result in a breakdown.

This fostered the creation of MOSFET, devices that are voltage controlled instead of current-controlled. They emanate a positive temperature coefficient vital for resistance. This resistance stops thermal runaway, which prevents secondary breakdown. The creation of IGBT emerged in 1980. It was a crossbreed between MOSFET and bipolar transistors. The IGBT is voltage controlled, just like MOSFET but has several distinguishing features.

The distinguishing factor between IGBT and MOSFET is that the terminals of IGBT are collector, gate, and emitter, while MOSFET comprises gate, drain, and source terminals. MOSFET may also possess a body terminal at a time. These devices are both voltage-controlled.

IGBT means insulated gate bipolar transistor. It’s a three-terminal conductor that will join the current carrying capability of a bipolar transistor and is easy to control with that of MOSFET. They are the newest invention when it comes to power electronics. Its applications are majorly on electronic switches where you can use them as medium to ultra-high power applications like switched-mode power supplies. The structure of IGBT is quite similar to that of MOSFET except for the extra p substrate that is under the substrate.

On the other hand, MOSFET stands for Metal Oxide Semiconductor Field Effect Transistor. It’s a special kind of field-effect that is used on large-scale integrated circuits that have sophisticated structures and high input impedance. It has a four-terminal semiconductor that controls analog and digital signals. Its gate is situated between the drain and the source. They are insulated by a metal oxide layer that prevents current from flowing between the channel and the gate. MOSFET is used in a myriad of areas as a semiconductor device to strengthen weak signals.

The insulated gate bipolar transistor is a cross between MOSFET and BJT. It has an output switching and a conduction property of a bipolar junction transistor, but when it comes to the voltage, it takes that of MOSFET, where they are both voltage controlled. They need just a little bit of small voltage to maintain the conduction in the device.

IGBT will combine with a transistor with a semiconductor’s low saturation voltage. They also have a high impedance and switching speed like that of MOSFET. The machine can handle large collector-emitter currents that have zero gates current drive. The emitter and collector terminals are associated with the conductance path in the three terminals, while the gate terminal is joined to the controlling machine.

The transistor is suitable for high voltage and high current applications. It is usually used for fast switching with tremendous efficiency in various electronic devices. They are used in devices like AC and DC motor drives, unregulated power supply, induction heating, traction motor control, and switch-mode power supplies.

One merit of using IGBT is that it gives higher voltage operation, more significant power gain, and lower input losses. It switches the current forward and is a unidirectional device.

Metal oxide semiconductor field-effect transistor is used to switch or magnify the switching of electronic signals. The device has four terminals: the drain, gate body, and source. In some instances, the source and body terminals are connected and thus bring it down to three terminals.

They are also referred to as insulated-gate field-effect transistors (IGFET) because the gate terminal is insulated. It is highly effective even when working in low voltages. The device has a high switching speed and virtually no existence of gate current. You can use the device for both analog and digital circuits, calculators, amplifiers, digital telecommunication systems, and MOS sensors.

Even though, MOSFET works pretty efficiently on high voltage levels since it can create instability in a device. This is because they have a metal oxide layer that can run the risk of getting damaged through electrostatic changes.

Difference between IGBT and MOSFET

These two devices operate at high voltage but one main feature that differentiates the two is that the IGBT device has three terminals while the MOSFET device has four terminals. Other differences include;

MOSFET and IGBT are devices that are replacing the older version of transistors and other mechanical machines fast. They are majorly used in electrical circuits and their high efficiency and switching are swift. This makes them an important part of a circuit. They are both voltage-controlled.

IGBT is a cross of MOSFET and BJT but it is not always the best device to go for every time. With various improvements on MOSFET, the device has shown class and has more dynamic. IGBT will run effectively at high voltages while MOSFET will run efficiently at low voltages. Depending on your needs, you can choose which one to go for keeping in mind the output required.