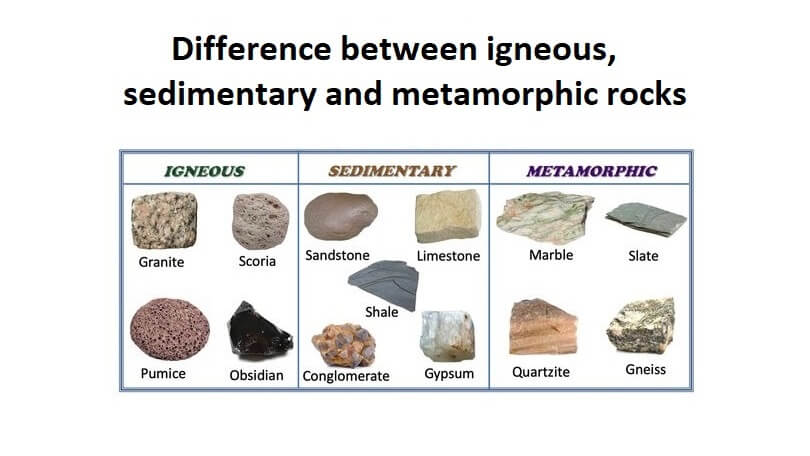 Igneous rocks are formed when magma (molten rocks) or lava (molten rocks that burst through the earth’s surface) cools and solidifies after being exposed to air or water. The majority of these rocks are crystalline in nature. A few examples of igneous rocks include granite, basalt, and pumice, among others.

Sedimentary rocks are formed as a result of the aggregation and deposition of other pre-existing rocks, as well as minute fragments of animal remains, which get firmly embedded at the bottom of bodies of water. The structure of these rocks is a jumble of fragments. Sandstone, chalk, and coal are all sedimentary rocks, and they all have different properties.

Igneous Vs. Sedimentary Vs. Metamorphic Rocks

For example, the differences between igneous and sedimentary rocks and metamorphic rocks are found in the rocks’ origin and production; their texture; their categorization; and so on.

What are Igneous Rocks?

It is igneous rocks that are generated when molten material cools and solidifies, resulting in the formation of crystalline material. Because these rocks are formed from liquid (as opposed to sedimentary and metamorphic rocks, which are formed from pre-existing rocks), they are referred to as ‘primary’ rocks in the scientific community.

Due to the fact that igneous rocks constitute 95 percent of the top layer of the earth’s crust, they are numerous. In addition, there are over 700 distinct types of these rocks to choose from. Granite is the most well-known of these igneous rocks, and it is used to make the vast majority of kitchen worktops.

What are Sedimentary Rocks?

Depending on their chemical composition, sedimentary rocks may be divided into three types: clastic, organic, and chemically precipitated. Clastic sedimentary rocks are those that are formed as a result of the mechanical weathering of pre-existing rocks, and they are classified as such.

Organoclastic sedimentary rocks are those that have formed as a result of the accumulation and deposition of the remnants of deceased plants and animals. When two minerals contained in rocks come into contact with one other, a chemical reaction may occur. When the temperature is lowered, these minerals precipitate and form chemical sedimentary rocks.

What are Metamorphic Rocks?

The majority of the earth’s crust is made up of metamorphic rocks. It is a kind of rock that may be found in abundance. Interestingly, since the Taj Mahal is completely composed of marble, the monument may be thought of as a single massive metamorphic rock.

Igneous rocks are generated when molten material cools and hardens into a rock. On the contrary, sedimentary and metamorphic rocks are formed as a result of the breakdown of previously existing rocks.

Igneous rocks have a crystalline structure, while sedimentary rocks are fragmented and stratified, and metamorphic rocks are either foliated or non-foliated, depending on their age.

In addition, igneous rocks account for 95% of the top layer of the earth’s crust, with the remaining 5% made up of various rocks and minerals (see Figure 3).

The genesis, texture, structure, and other characteristics of igneous, sedimentary, and metamorphic rocks may readily distinguish them from one another. It is possible that the three kinds of rocks are the same mineral or sediment that is passing through the rock cycle.

For example, an igneous rock may undergo the processes of weathering and cementation to transform into sedimentary rock after being formed. If exposed to variations in temperature and pressure, this rock may undergo additional transformation into a metamorphic rock.