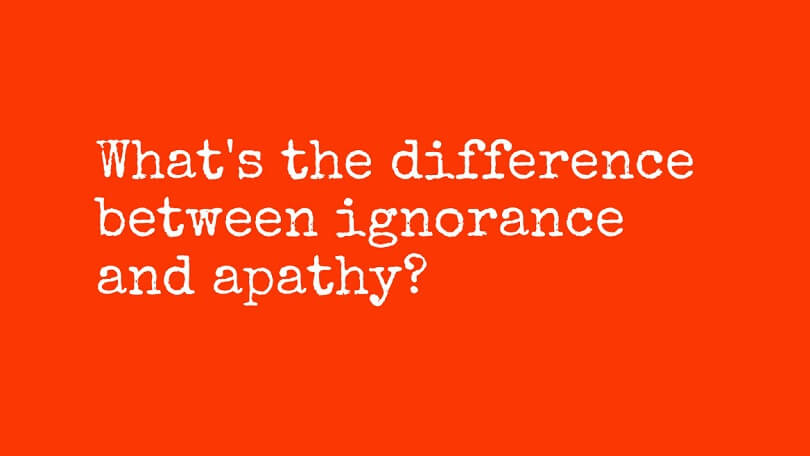 Apathy and ignorance are words to describe how people think. They usually draw the mindset of an individual in the negative sense. Ignorance is defined as a state of not knowing or lacking understanding. This can be due to deficiency in education and is directly related to ignorant, which is defined as being uneducated. Ignorance is a word that describes an individual who makes mistakes because of not knowing better. It is for a fact, an intellectual deficiency.

On the other hand, apathy describes a person who has no interest or emotion in something. Ignorance is a state of circumstance. If the person knows better, they will surely act differently, but an apathetic individual will not change even with new information concerning a certain situation. To change the perspective of an apathetic person, their emotions and heart have to be altered.

The main distinguishing factor between these two terms is that ignorance lacks information or knowledge, while apathy lacks concern or interest. So, when someone is referred to as ignorant, they lack information to do something or are unaware of a certain situation. On the other hand, when you are referred to as an apathetic individual, you have the information. Still, you are not concerned about the situation or interested enough to do something.

Ignorance is, therefore a state of lacking knowledge or being unaware of it. Ignorant is a term used to describe an individual in the mentioned state. There are various types of ignorance. This state is mostly negative and can affect your life negatively. But it also offers an opportunity for the ignorant individual to have a learning curve to gain more information and knowledge. This process will ensure this trait is lessening.

Conversely, Apathy is a situation where a person has no emotions, interest, or feelings to do something.

The person usually suppresses emotions of passion, concern, and excitement, among other feelings. When the nature of apathy is on the extreme end, it is then considered a disorder. Various mental conditions stem from apathy. The degree may change and will depend on an individual basis. There are three sub-types of apathy.

Ignorance is the state of being unaware or lacking information about something. A person in the said state is referred to as ignorant. This is an adjective that describes an individual that has ignorance. There are various types of ignorance, which usually depends on the type of information an individual does not know.

This state can negatively influence the mind. It can make a person lose power and confidence over themselves. The state can also affect the people that surround you. But other times, it gives the ignorant person an opportunity to learn and gain more knowledge if they make the effort to rectify their ignorance.

They can have that urge to continue gaining knowledge even when it seems difficult. There are instances where an individual can pretend to be ignorant. This is an extremely rare case scenario. But it is always negative. There are different concepts when it comes to this state in various fields. They include rational ignorance, pluralistic ignorance, vincible ignorance, among others. These concepts have different understanding and meanings depending on their fields.

Examples in sentences include:

Apathy is when a person lacks feelings, emotions, or may not be interested in partaking in something. Their excitement or concerns are suppressed and not reflected in such a situation. Apathetic is an adjective that describes an individual who may have apathy.

There are various aspects where such individuals may lose interest. It can be physical, social, or emotional. The word apathy was derived from the Greek word “apatheia” from “apathes” which means without, and pathos means emotion.

A Person who doesn’t just wake up has apathy. There are usually reasons behind this state. The person may have experience laziness, rejection, and disappointment, which makes them resort to being disinterested or emotionless for them to cope with the underlying stress. At times the state is cognitive since the individual knows it but opts not to do anything regardless.

But most times, people do not know they have this behavior. Many mental disorders stem from increased levels of apathy, and this is referred to as pathological apathy. For instance, conditions like Alzheimer’s, schizophrenia among other neurodegenerative conditions. You can easily measure your pathological apathy or in a healthy individual. This is done by filling questionnaires, apathy evaluation scale, dimensional apathy scales, and apathy motivation index, among other methods. You will be able to be treated with medication up to a certain extent.

Difference between Ignorance and Apathy

Depicted in different levels and ways, from individual to individual, these traits can be positive while others negative. Knowing the differences between apathy and ignorance will put you better to use these words well.

Everyone at one point in time has experienced these feelings and can very well impact your life. They are negative traits, so it is best to avoid them at all costs. You need to be productive and have knowledge. Understating your emotion and feelings plus that of others is also equally important.