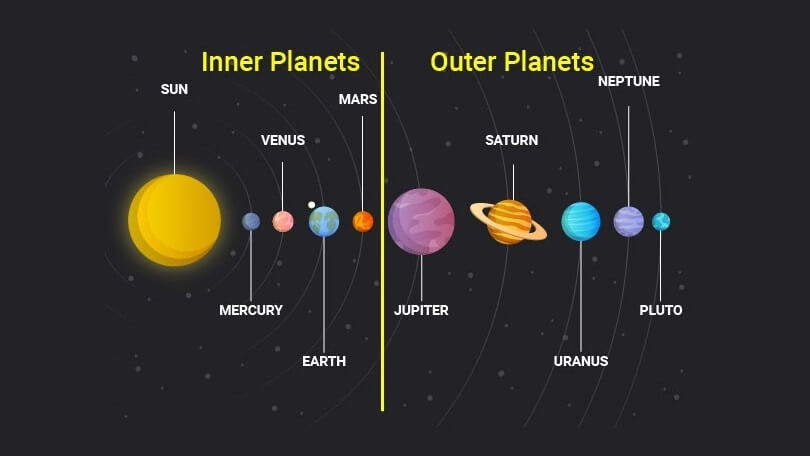 The solar system comprises various planets, which are eight in number. But some scholars disagree with this notion saying that they are more than eight planets in the universe. There are even other notions that write off Pluto being a planet. With all these notions floating around, one thing you can be sure of is that these planets can be divided into two groups, namely the inner and outer planets.

The inner planets are comprised of metal and rock, which can be considered solid. They move slowly around their axis because they are heavy. The average diameter can be close to 3000km since they are small planets. On the other hand, outer planets are made of gases and therefore are not solid. The gases are Hydrogen and Helium. They have an average diameter of 48000km.

What are the Inner Planets?

These planets from the solar system orbit between the asteroid belt and the sun. They are also referred to as terrestrial planets. Most scholars believe that these planets possess an iron core. They have solid surfaces, but these four planets have different environments from each other.

Their orbits are short and thus spin a bit slower than their counterparts. The inner planets have rocky surfaces like valleys, plains, mountains, among other rocky surfaces. Their inner temperatures are quite low, making it possible for such rocky surfaces to exist. These rocks are made up of heavy metals like iron and nickel plus silicate rock.

The earth is the one planet from the terrestrial planet with life. Some scholars believe that Mars may also support life in it, but there is no evidence of such claims. Venus and Mercury, on the other, do not support life, and there has never been a case of a life existing on these planets.

Here are the four inner planets:

Mercury: It is the closest planet to the sun and is the smallest of the inner planets. It is greyish in color and somewhat looks like the earth’s moon. The planet has deep craters and particle silicate that cover a thin layer. The planet has a thin atmosphere, which makes the temperature extreme. When it is hot in the day, the temperatures are 430 degrees, while in the day, when it’s freezing, it’s -187 degrees. The planet does not have its personal moons and is one of the densest planets on the solar system. It is made up of mostly nickel and iron.

Venus: The planet is the same size as earth. Its atmosphere comprises 96 percent carbon dioxide nitrogen plus other gases. Its atmosphere usually traps heat, making it the hottest planet in the solar system. Various crater impacts make it quite hard for manmade objects to get into the planet without them disintegrating. Its surface is marked with volcanoes as well as deep canyons. It is also popularly known as the morning star since it is a bright planet. It has no moon.

Earth: It is the most giant planet among the inner planets and has life on it. It has extensive areas where there are liquid water and water supports life. There is water vapor in the atmosphere, and hence it’s quite easy to moderate temperatures. Their rocky surface comprises canyons, heavy metalcore, and mountains. The season on this planet is quite regular, but with the exception of regions that are closer to the poles and equator.

Mars: It is also known as the Red planet. This is because of its rust iron-rich elements that are situated on its surface. One unique thing about this planet is that it has huge mountains than any other planet in the solar system. For example, Olympus Mons has a height of 69649 feet. Its surface is mostly covered in craters. The ice caps in the polar areas melt during spring and summer. Its atmosphere is thin, and therefore researchers believe that water existed there in liquid form. It has two moons, namely Deimos and Phobos.

What are the Outer Planets?

These are the outermost planets of the solar system and are beyond the asteroid belts referred to as outer planets. They are also known as Jovian planets without Jupiter. They are all massive planets, but each of them is a different composition. They have thick atmospheres with low temperatures and gravities that allow the planet to retain gas particles and not escape.

The outer planets are able to generate hurricanes because of their Coriolis Effect. These storms have been spotted by researchers like the Great Red Spot on Jupiter and Great Dark Spot on Neptune. Their density is close to that of water. For instance, Saturn has a lower density than water. They have rings around them.

They have numerous moons and, deep within them, have a magnetic field powered by electrical currents created by fluid movement like that of liquid hydrogen. These magnetic fields are more significant than that of the inner planets. They are also referred to as gas giants because they are made up of mostly hydrogen, helium, and a rocky core.

Here are the outer planets:

Jupiter: It is the largest planet, with a mass of at least 300 times the earth. Jupiter has 63 moons and is the brightest planet. It has a stormy atmosphere like the Great Red Spot that was big as the earth.

Saturn: Its attractive rings make it the most beautiful planet in the solar system. Its rings are the most visible ones out of the four planets. The discovery of Saturn’s ring made astronomers notice that the other outer planets have rings. When you take a closer look at the rings of Saturn, you will see that it has three significant rings that have other smaller rings attached to the three rings. These rings are made up of frozen water and unknown particles.

Uranus: It’s the smallest out of the four outer planets. This is the only planet that rotates on its side. There are various notions for why this planet rotates this way. Some think it’s because of major collisions, while others say it’s because of small shifts that happen in planet formation. Its atmosphere contains ice. The ice has methane, water, and ammonia.

Neptune: The last planet on this list. It has the fastest wind that can reach more than 1200 miles in an hour. Its atmosphere contains a lot of ice. The contents in the ice are water, ammonia, and methane. The methane in the atmosphere gives the planet its blue color.