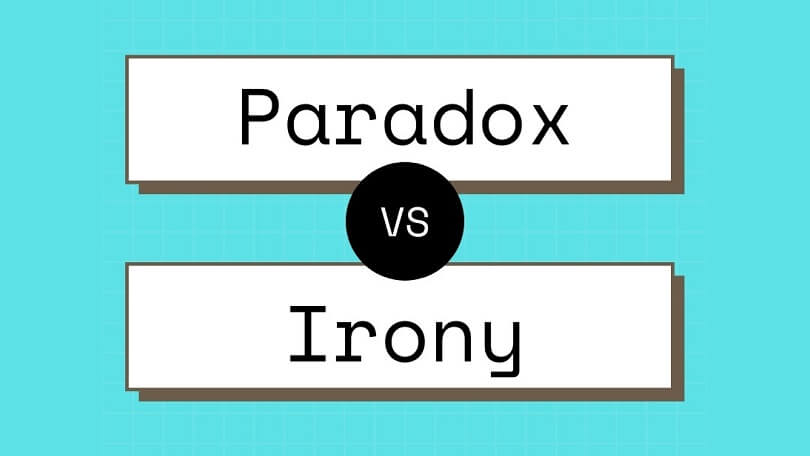 It is easy for words to lose their actual meaning in a casual conversation as they are tossed around. This mostly happens, especially when the actual meaning of the word is more esoteric. In such a scenario, it becomes pretty difficult for the word to retain its original meaning, with the newly developed concert of the original word creating different sophistications once they have been accepted widely and within the popular culture. An excellent example of such words is Irony and paradox.

The difference existing between Irony and Paradox is the fact that Irony is referred to real situations or within real conversations whereby the original meaning is very different from the intended meaning. Paradox on the same is referred to cases where a statement refuses or challenges the intuition intending to create uncompromising contraindications.

The irony is normally used in real situations or conversations, whereby its original meaning is very different from the intended meaning. Therefore, irony is when the speech or action is the opposite of what is really expected to do or even mean. Therefore, the main task of irony is to outline an emphatic and humorous effect.

On the other hand, Paradox is a contradicting statement of the actual meaning with a small amount of truth. It is, therefore, true to say that paradox is a contradictory or absurd sentence that can either be true or false after the speech investigation. A paradox is also closely related to the oxymoron. Both may seem contraindicating but are simply true.

The irony is mainly referred to in real conversations or situations whereby the right meaning is very different from what is intended. The term gained its popularity after the release of Alanis Morisette’s song” Ironic,” which made irony move to its current popular culture. The songs described tragic scenarios using situational irony, like a man terrified of flying and ending up boarding a plane and crashing. Therefore, the irony is when a speech act is the complete opposite of what is actually expected to mean.

Irony exists in three types: dramatic irony, verbal irony, and situational irony. Verbal irony refers to a satire that takes place when a speaker says something that ultimately implies another thing. A good example is they mean something more or feel different. The irony can be referred to as sarcasm when the intention is to make fun of an individual. Another type of verbal irony is known as Socratic irony. Here a person will ignore the speaker or any other situation to deliver a message that is not arguing worth.

The dramatic irony arises when an audience or listener is more knowledgeable than the speaker or outlaid information. When a person’s actions indicate different meanings in regards to an audience creating a surrounding or environment that is full of suspense, it can also be referred to as tragic irony when applied in tragedies. A good example is seen in Shakespeare’s Romeo and Juliet. In the set-piece, the audience properly understands that the characters are alive; however, the characters are not aware of that and end up drinking poison.

What is a Paradox?

A paradox refers to a statement that contradicts the real meaning but has a little bit of truth. It gained fame after the release of The Pirates of Penzance’s piece, which is a comic opera and the “Most Ingenious Paradox.” Gilbert and Sullivan wrote it. The paradox is related to the oxymoron, and both seem to have contraindicating opinions. However, despite contraindicating each other, they still remain true in nature.

The paradox exists in two types; this includes the logical paradox and the literary paradox. With logical paradox, it refers to a contraindication that is meant to oppose logic and can be unreasonable. However, logical paradoxes are not possible within the real world. Zeno of Elea, a famous Greek philosopher, devised several logical paradoxes. Some of the examples include Achilles and the Tortoise, whereby the motion is contraindicating and comes out as an illusion.

Difference between Irony and Paradox

Irony and paradox are simply esoteric concepts. This means they are mostly understandable to only a few populations. Not every person can decode the hidden meaning which is different from what is intended.

Irony refers to something said with a certain meaning, but the interpreted meaning is completely different from what was intended by the speaker. Irony and paradox are two different terms and have very different meanings, with the irony being logically possible, something that is not the case with paradox.