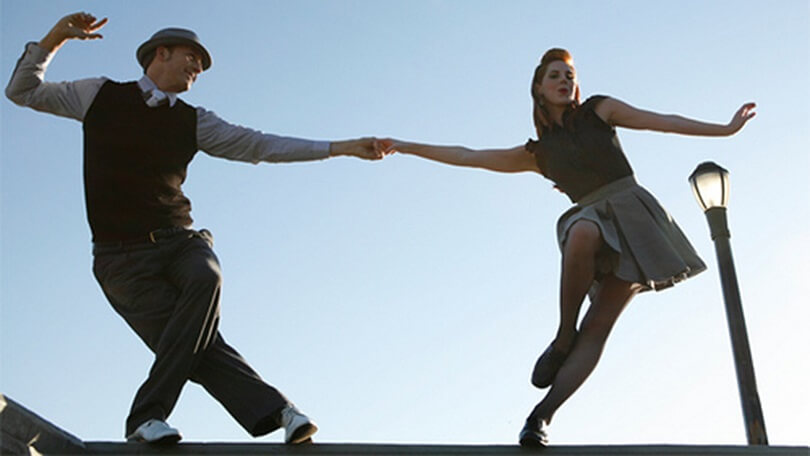 The round dance includes a cued ballroom with a choreographed dance. Dancers in this dance move in a circular motion around the dance floor. They move in a counterclockwise pattern. This dance is one example of the social round dance that includes hustle, mambo, jive, salsa, swing, tango, and many more.

Among these social dances, Jive and Swing are known to be the most popular. They have steps that are used all over the world in dance competitions. While the steps of these two social dances are likened to each other, they come with their individual distinctions.

Jive is a bouncy kind of dance with an up and down and peppy move in place. Swing on the other hand is a kind of lazy and easy-going dance. The steps in Jive quickly change and do not allow interpretation for music. Swing allows for interpretation of music as it has a smooth synchronization during the dance.

Jive is a variation of the dance to jitterbug and is among the five common Latin Dances. It became the generic name for swing dance in the United Kingdom. Jive is danced to Western Music during dancing competitions of the international style ballroom but it is grouped with the Latin Dances.

Swing dance on the other hand is a social dance that came about in the 1940s. It has extreme athletic moves during performance. It is commonly used in the US as a dance to swing music. The dance steps in this social dance come with distinct variations. They have forms like the South shag’s, the east jitterbug, Lindy, the west coast wing, and the whip of the push in Texas.

Comparison between Jive and Swing

The Jive social dance is more than just a dance. Players of swing music considered it an expression of denoting foolish or glib talk in the 1930s and 1940s.

Jive is an energetic, happy dance. It involves slightly bending knee lifting and rocking of the hips.

It incorporates plenty of kicks and flicks during the dance. The woman does a bit of twirling. The dance does not move around the floor like other dances. Dancers put their knees close together during the dance and control their feet perfectly under their bodies.

There are many figures and music styles that the Jive social dance shares. It has a tempo with an East Coast swing. It has a single rock step and two triple steps. 1’2 is the rock step while 3 and 4 and 5 and 6 are the two triple steps. It is an energetic dance that shows more pumping being done by the legs.

Jive has a unique style of dancing that makes it possible to use with upbeat music like; swing, rock and roll, and boogie-woogie. A beginner needs to keep in mind that it is important to keep up with the rhythm of the music to be able to learn this dance. The drum provides the beat so it is more important to listen to the drum.

In this dance, the dancer often spins, flips, and lifts his or her partner. It is one of the most favorite social dances of all time. It can be easily spotted during a dance competition as it is fun, and dancers wear the best and biggest smiles.

There is a lot of flipping, throwing, and swinging of dancers. It has a non-progressive style and therefore performed on just one spot. It is most popular for a crowded dance floor. A lot of practice is required for the swing dance. Once you learn the moves in this dance, you will not stop swinging.

Styles that may be included in the swing social dance include; hip-hop blues, jazz, funk, ragtime, and pop. This famous music of all time has been greatly influenced by the best swing dancers.

There are a variety of partner dances in the swing dance including; jitterbug, Caroline shag, East Coast Swing, Lindy hop, jive, west coast swing, and boogie-woogie. Dancers are allowed to add their own expressions and style. Swing comprises fun and energetic dance styles.

Difference between Jive and Swing

In conclusion, we can say that both jive and swing social dances are part of the round table dance. They have gained popularity all around the world due to their unique and exciting dance steps. They have similar step elements that include a rock step and chasse in the basic figure. What makes these two social dances completely different from each other in style, character, music and so much more. However, they are both fun to engage in.