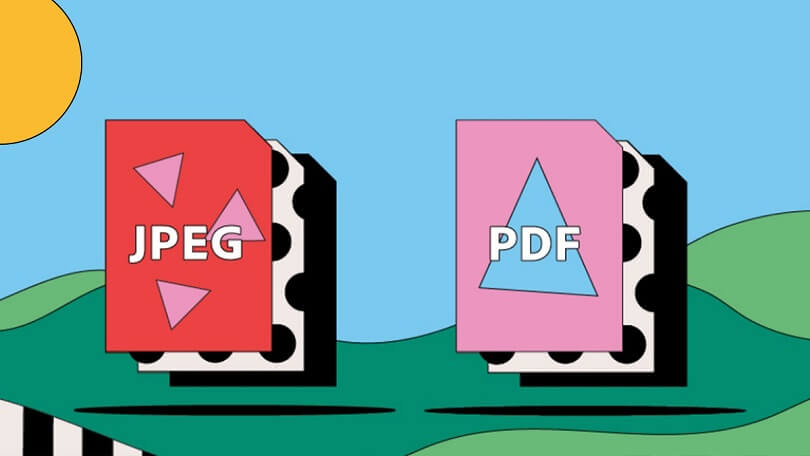 JPEG and PDF are two distinct sorts of file extensions that are used to contain various forms of data such as photos, documents, and other types of information. Their effectiveness for internet usage is enhanced by the fact that they can be sent extremely readily and fast if their sizes are tiny.

Apart from that, the fact that there are several kinds of computing devices, such as personal computers (PCs), laptops, smartphones, and tablets, among others, necessitates the need that pictures or texts supplied by one device look exactly the same in the receiving device. File extensions such as JPEG and PDF are often used in this application.

The primary difference between JPEG and PDF is that JPEG is mostly used to compress and convey digital pictures, while PDF is largely used to document documents. On the other hand, PDF is used to transmit text, pictures, fonts, and any other types of information that must be shown as part of the file’s overall content when it is opened.

It is pronounced as “jay-peg” and refers to a kind of file extension used for delivering web page graphics and still photos to other people over the internet. It is an abbreviation for the Joint Photographic Experts Group, which was formed in response to the restrictions of Graphics Interchange Format (gif) files. It is also known as JPEG.

PDF, on the other hand, is the abbreviation for Portable Document Format, which is the longer form. It is pronounced like ‘pee Dee eff,’ and it is used for transferring files that comprise both written and graphically represented content.

What exactly is JPEG?

It is a kind of file format that is mostly used to reduce the size of pictures, particularly graphic images, in order to save storage space. It is pronounced “jay peg,” and it is the abbreviation for Joint Photographic Experts Group, which is the full name. The work of developing it began in 1986, and by 1992, it was ready to be introduced as the industry standard for picture file formats.

A key component of JPEG is the discrete cosine transform (DCT), a non-reversible picture compression technique developed by Nasir Ahmed in 1972 and initially used in digital cameras. It was launched as a replacement, or more accurately, as an enhanced version, of GIF (Graphic Interchange Format) files, which were previously available.

Unlike the GIF standard, which is only usable for pictures that are just in black and white or have a few colors and simple graphics, the JPEG standard allows for images to have more than 16.5 million colors in a single image. Furthermore, in contrast to the GIF format, which has a compression capacity of just 4 to 1, the JPEG format has a compression capacity of 100 to 1.

After its release, digital pictures and images caused a stir throughout the internet since it assisted in shrinking their sizes, making them incredibly ideal for web design, such as images used on e-commerce websites or social networking platforms.

However, there is a significant disadvantage to utilizing photographs in the JPEG format, particularly when printing. Because JPEG is used to compress photographs, it often results in a reduction in the quality of the image in question. Due to the fact that the JPEG format works by lowering the color fluctuations to an average level and removing those aspects of a picture that are not apparent to the human eye, this is what occurs. As a result, when a JPEG picture is magnified, it looks blocky, making it unsuitable for printing.

What exactly is PDF?

It is a kind of file format that is used for transferring documents comprising written content, graphics, bit maps, and fonts across various types of computing systems, such as desktop computers and laptops. It is pronounced as ‘Pee Dee Eff’ and is an abbreviation for Portable Document Format (PDF, for short).

Adobe Systems’ Research and Development team created it in the early 1990s. It is still in use today. Team leader John Warnock was a co-founder of Adobe Systems and the Camelot R&D team was given the name Camelot to represent the team. The Windows and OS|2 Conference, which took place in January 1993, was the venue for its debut. It was first introduced as an open standard in 2008. It had previously only been offered in a proprietary format.

Beyond pictures and text, PDF may be used to communicate annotations, movies, 3D models, and a variety of other types of files. It can contain multiple pages and file attachments, as well as digital signature and encryption capabilities, allowing you to complete important projects, assignments, and other important workflows without having to worry about which hardware, software, or operating system to use to transfer the data in question.

It is possible to expand a PDF file without having to be concerned about losing the quality of the pictures and text included inside it. Apart from its adaptability, the most notable attribute of a pdf file is that the graphics included inside it are of very high quality and may even be customized, making it particularly well suited for printing.

Difference Between JPEG and PDF

When people encounter terminology like JPEG and PDF in the description of online sites, they are typically bewildered as to what such phrases mean. They are unfamiliar with the meaning and function of these phrases, and as a result, they are perplexed as to which program should be used to open and transmit them. Even individuals who are familiar with these file extensions are often perplexed as to whether or not they are suitable for transmitting or printing picture files.

Nonetheless, it is vital to note that the JPEG format is primarily employed for image compression and, as a result, is more appropriate for web design than other formats. The PDF format, on the other hand, is used for transferring pictures that are of uniform size and quality. As a result, it keeps the quality of the original photographs, which may be further customized. Because of this characteristic of the PDF, it is the optimal format for printing pictures.