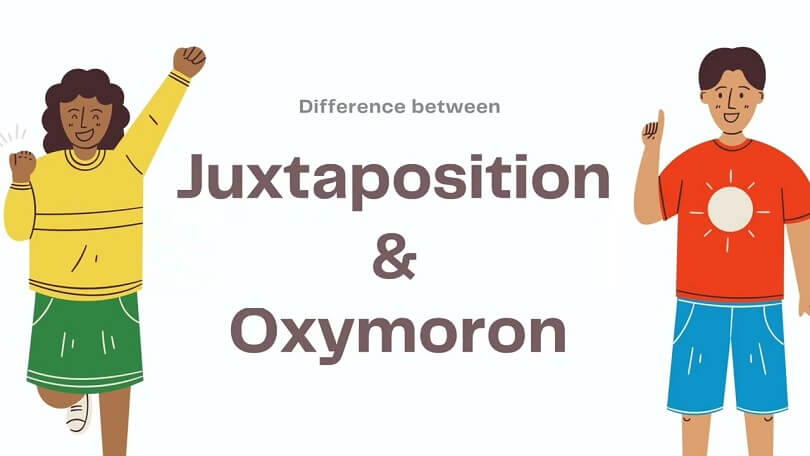 Placing two elements together to compare them is referred to as juxtaposition. This comparison aims to determine the elements’ contrast, differences, or similarities. Oxymoron on the other hand is the act of placing two completely contradicting terms together. These terms could be ideas, emotions, personalities, characters, and so on. The rule is to ensure that the elements have a complete conflict or contradiction.

Comparison between Juxtaposition and Oxymoron

Juxtaposition can be applied in both noun and verb forms. It refers to a situation of placing two elements together to compare or examine them. The examinations or comparisons include their differences, similarities, and contrasts.

In grammar, juxtaposition explains a situation where two words are missing in conjunction. For example, mother and father.

‘You should never talk out of fear’ and ‘You should not fear to talk either’ are two elements placed together in juxtaposition.

An oxymoron is a different kind of juxtaposition. It places two elements together intending to get the contrast between them. Writers, poets, and authors have used oxymorons as a figure of speech to help create an effect on the reader or the listener. The effect is to help capture the attention of the listener and the reader.

There are a few types of oxymorons that include adjective-noun combinations, and comical oxymorons. The elements involved in creating the figures of speech include ideas, emotions, objects, personalities, tastes, characters, and many others.

An adjective-noun combination means that the first word of the oxymoron is an adjective while the second one is a noun. Examples of such words could be; sweet pain, loud silence, adorable mischief, falsely true, fearfully brave, and many others. All these have a character of contradiction.

An oxymoron has a comical humorous effect on the reader or the listener. Comedians in their material, as part of their routine, mainly use an oxymoron. An example of such a comic is when George Carlin performed a routine on how military intelligence and business ethics should be considered an oxymoron.

Difference between Juxtaposition and Oxymoron

In conclusion, the main difference between juxtaposition and oxymoron is that oxymoron is a different kind of juxtaposition, only that it uses contradicting elements. The juxtaposition could use a variety of elements, ideas, and characters while the oxymoron only uses phrases that contradict each other. If elements used in a statement do not have a form of conflict, they cannot be referred to as an oxymoron. A good example of an oxymoron is; ‘bitter sweet’. These are two contradicting words used in a statement to send some form of communication to the reader or the listener.

A great juxtaposition example is a gardener planting a cactus next to the bush of red roses. While the two elements do not necessarily contradict, they help grab the attention of the audience. Placing the two plants together for comparison or examination is what we refer to as juxtaposition. The similarity in these two plants is the element of the thorns while the difference between them is the outcome of both. This is enough to bring one to attend.

Mark Twain wrote a famous quote that says that it takes three or more weeks to write down a good impromptu speech. That is in itself an example of an oxymoron. The contradicting elements in this statement include ‘three weeks’, ‘impromptu speech’, and write down. The main purpose of this saying or quote was to grab the attention of the reader and put them in a position of understanding the three contradicting elements.

We can therefore see that there could be a slight relationship between the juxtaposition and the oxymoron. What is important is to understand a few nitty-gritty things that include; understanding that you can use juxtaposition as a noun or as a verb but can only use an oxymoron in noun form. Confusing these two and using them in the wrong context messes up with the mind of the reader or the listener and the aim of both is not served.