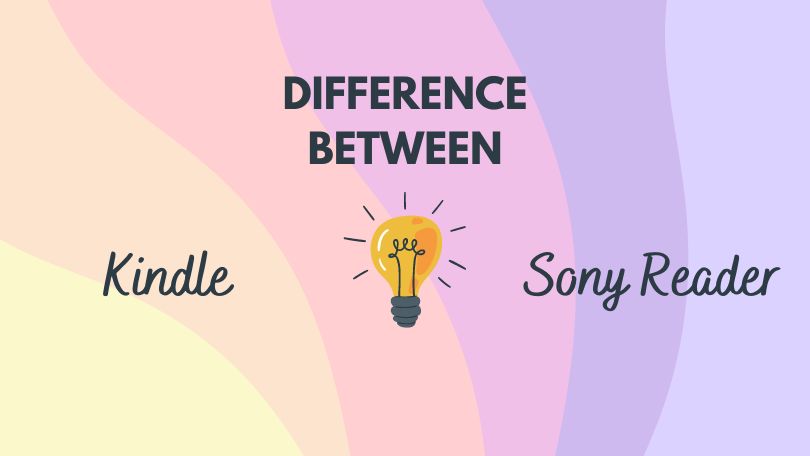 eReaders are the new successful reading gadgets. They are rare and are indirectly environmentally friendly. Although eReaders have not completely replaced physical books yet, they are already headed in that direction. The two main popular eReaders include Amazon Kindle and Sony Reader.

The Kindle has an inbuilt built-in keyboard while the sony reader works more on a modern touch screen display. The two products are used for the same purpose but come with a few differences that include design, compatibility, and connectivity.

Sony reader was manufactured by Sony and was a series of eReaders. Its touchscreen display is enabled to support PDF files which is still the most supported format for eBooks. Sony Readers can be accessed on Windows and Mac operating systems. The downside is that these readers do not offer wireless connectivity.

Comparison between Kindle and Sony Reader

What is a Kindle?

Another term for kindle is Amazon Kindle. It was introduced by Amazon in 2007 and was its first eReader device at the time. Kindle gained popularity immediately and was already sold out from its first stock. There have been ten generations of kindle eReaders since 2007.

The first generation was released in the United States. The popularity of the first version made room for international and further versions. Amazon gained its popularity due to its independent nature. It enables wireless connectivity on all its devices.

It also contains very high speeds that make it possible to connect to the Amazon store through the Whispernet Infrastructure. The user has an easy time as they do not need to have their PC to install the eBooks. This is one feature that makes Amazon Kindle stand out.

The only downside which would have been a great input by the Amazon Kindle is the fact that they cannot support PDF files. To access the documents in PDF format, one will need to convert them into a kindle format to proceed to use them.

The Kindle devices have huge popularity and are available on Amazon. They come with protection cases as well as audio adapters for vocal navigation. The audio adapter also serves the purpose of listening to eBooks. They have a wireless charging port for the latest kindle devices.

What is Sony Reader?

This was a series of eReader devices and was manufactured by Sony. The first Sony Reader device was launched in 2004. It gained popularity in a very short time. The Sony Reader supported almost all file formats. Users were allowed to open images as well as perform an audio player using their headphones. It was possible to use these Sony Reader devices in portrait or landscape mode.

The main selling point of the Sony reader was how compatible they were with several devices. Their compatibility was possible with almost all operating systems including Windows, Mac, Android, and even Linux. The data transfer speeds were excellent during wired connection.

The touchscreen displays offered by these devices are active.

The one disadvantage about these Sony Readers is users not being able to independently access the eBooks from the computer. They were not wireless devices and PCs were therefore needed to transfer the eBooks.

The latest Sony Reader device that came out in 2013 is not compatible with many latest generation computers.

Sony discontinued its eReader lineup in 2014 due to the great competition it faced from giants like Amazon. The remaining stock was however still sold to the customers.

Difference between Kindle and Sony Reader

In conclusion, we can confirm that eReaders have partially replaced books and continue to take this direction. They are environmentally friendly. Amazon, Kobo, and Barnes are a few brands that provide eReaders. Amazon’s Kindle devices have notably taken over the eReaders market.

Sony Reader was a new gadget when it was launched back in 2004. Customers were greatly attracted to it as it gave the possibility of digital reading. Many brands invested in this same business as the trend continued to emerge.

After 2010, Kindle Device completely took over the market. They dominated with their eReader products. Customers began to swamp in this direction, overpowering all other brands including sony. Due to this reason, Sony stopped its production in 2014 but continued to sell what was left in stock to its customers.

Users can still use the devices produced by Sony initially as they have not been rendered useless. The main purpose of the Sony devices was to make eBook reading possible as well as minimal media consumption.

The devices still work but the fact that they are extremely slow makes them the least preferred. Customers prefer the Amazon Kindle to the Sony Reader.