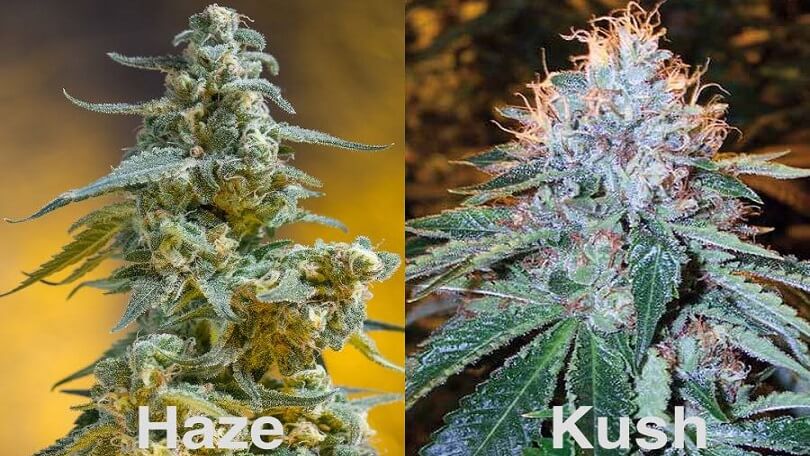 Cannabis or what we commonly refer to as weed belongs to the Cannabaceae family. Another name for cannabis is hemp and this is used for non-medicinal purposes. Cannabis is commonly used as a drug but has other uses such as fiber seeds, oil, vegetables, juice, and so on. It has three classifications that include cannabis Sativa, cannabis Indica and cannabis ruderalis. Haze and Kush are under the Cannabis Sativa and Cannabis Indica respectively.

Kush is believed to have found its origin in Afghanistan. It was particularly found in the areas of Northern Pakistan and North-West India. Its name was from the Hindu-Kush Mountain range. In 1970, the Kush plant was taken to America. It has continued to grow there from that time until now.

There are different purposes that the Kush plant gets to fulfill like making cloth from its fiber and producing tetrahydrocannabinol.

Haze on the other hand is believed to have originated from California and Jamaica. It is a taller plant when compared to the Kush plant. It is very bushy and can grow up to 20 feet in height. Its seeds are however very small in size. There are many variants of the Haze plant that include the El Nino, Purple Haze, Arhan’s Haze Blue Pearl, etc. Haze belongs to the Cannabis Sativa class. Carl Linnaeus discovered the Sativa species in 1753. Sativa is a term that means cultivated.

Comparison between Kush and Haze

Kush is a plant that belongs to the Cannabis Indica Species. Jean-Baptiste Lamarck first published the Kush plant in 1785. Lamarck was collecting a specimen from India when he discovered the Kush plant. It is a short plant with a canonical shape and is densely branched.

The leaves in the Kush plant are broad and short. People believe that this plant came from the Hindukush Mountain Range. This particular place is harsh in terms of climate as it is extremely cold.

Kush can grow in such harsh climates and is therefore cultivated in cold regions. The plant has a higher amount of tetrahydrocannabinol when compared to the Haze plant. It is cultivated both traditionally and illegally in India and is used to produce charash which is a form of hashish. Kush has a few benefits like treating body pains and is commonly referred to as ‘body buzz’.

Kush can also be used to treat insomnia, anxiolytic which is a type of anxiety disorder. It is a medicinal and recreational purpose plant or drug. Kush has the power to soothe and calm aching nerves. In 1970, the Cannabis Indica was brought to India from the United States of America to India. It formed a hybrid with Cannabis Sativa and increased Marijuana production in the United States.

This is a plant that belongs to the Cannabis Sativa family. It was first discovered in Eastern Asia but has gained worldwide popularity due to its widespread distribution. Before its discovery, Haze was a source of industrial fiber, food, recreation, seed oil as well as religious and spiritual moods and medicine. Carl Linnaeus published the Haze plant in 1753, for the very first time.

The Haze plant has unisexual flowers. They can either be male or female. Unlike the Kush plant, the Haze plant is tall and bushy. The Kush has 500 compounds and 113 cannabinoids. The level of THC, when compared to the Cannabis Indica, is rather little.

Haze has a powerful effect of uplifting your cerebral capabilities that help reveal the difference from Marijuana. It grows vegetative within a period of 16 to 18 hours. It can grow up to 20 feet and is extremely bushy.

The haze plant has a sweet and sour plant with potent seeds. It comes with variants that include El Nino, Purple Haze, Arjan’s Haze, Blue Pearl, etc.

Difference between Kush and Haze

In conclusion, we can say that the Kush and Haze plants both belong to the Marijuana family. They both have a great smell and sweet taste. The differences between these two plants are their level of potency as well as their exquisite flavors.

Haze comes in bright yellow and green colors and also has a very light smell. Kush on the other hand has a deeper green color and a very deep aroma. Despite the Haze plant having the light characteristics of smell and color, it comes with a very powerful effect.