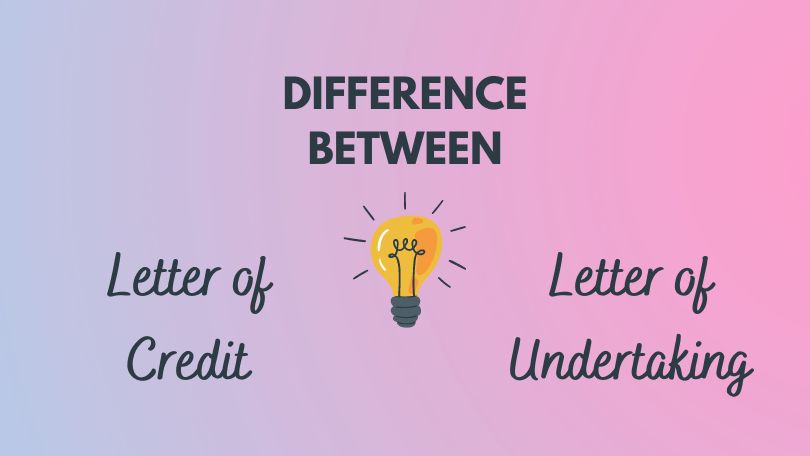 Letter of Credit Vs. Letter of Undertaking

Though both these documents are important during international trading, they come with differences. A letter of credit is more reliable and does not entertain fraudulent activity. A letter of undertaking on the other hand is unsafe and is at risk of allowing fraudulent behavior.

Both letters are used to make the process of a transaction between the countries doing the transaction a seamless one. A letter of credit is the means through which the bank provides a guarantee to the seller and ensures correct payment is made at the right time. The bank has an obligation to clear the arrears in case the seller defaults.

A letter of undertaking on the other hand is an assurance made of payment completion but this is not bound by a contract.

Comparison between Letter of Credit and Letter of Undertaking

What is a Letter of Credit?

This is a letter provided by the bank that guarantees the buyer’s payment made to a vendor will be made on time and will ensure the correct amount is made. A small fee is issued by the bank for them to give the credit letter. Should a buyer default in making payments to the vendor, the letter states that the bank must remit the remaining amount to ensure that the vendor is paid fully.

The provision is referred to in the finance sector as a ‘facility’.

The worldwide trade industry is commonly known to use letters of credit. You can negotiate terms using the credit letter whereby; the bank can make payments directly to the recipient, or to a bank nominated by the payment recipient.

There are several types of credit letters available for different purposes. They include;

Letters of credit are a good alternative to use because different countries have their own different laws and distance.

What is a Letter of Undertaking?

This is a letter that guarantees the person a financial institution for a short duration. The issuing bank offers a guarantee to the foreign bank about customer repayment in foreign currencies.

The letter is mainly used to conduct transactions. A customer needs to make a margin payment to the bank, which is issuing this letter of undertaking.

A letter of undertaking follows the rules of the foreign trade policy. That governs the imports of services and goods.

Once the letter of undertaking has been produced, and the bank is sure of the security, the letter is shared with the foreign bank. Depending on the relationship between the customer and the bank, the margin payments could go higher.

It is a lengthy process because the next step is the bank releasing payment of the overseas branch of the Indian bank in the currency of the country transaction is being done. The amount credited to the banker’s account is referred to as the ‘Nostro Amount’ and a customer has the freedom to choose who gets to receive the payment.

In conclusion, we understand that international trade is done between parties from different countries and is healthy for the economy.