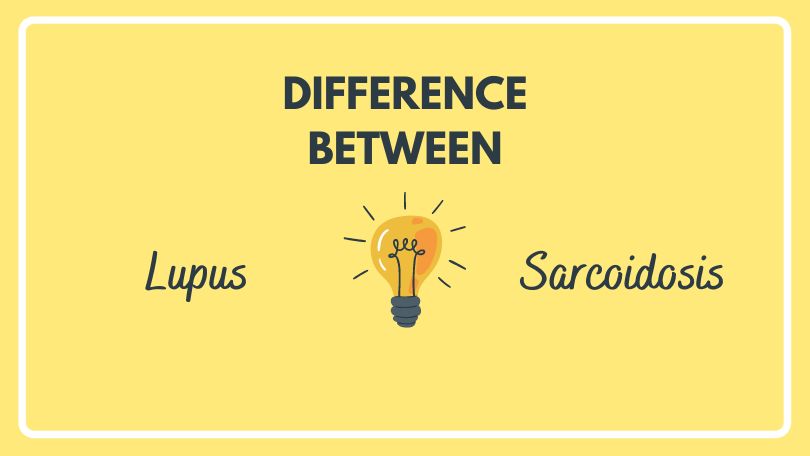 Many unrelated illnesses might present with symptoms that are similar to one another, leading to confusion among the public. It is possible for individuals to mistake a mild irritation for a grave condition, causing them to become anxious and their health to decline. Although lupus and sarcoidosis are two separate illnesses, a swollen gland is a symptom that both of these diseases have. It is critical to grasp the differences between them in order to comprehend the mortality rates associated with these illnesses.

The most significant difference between lupus and sarcoidosis is that lupus affects multiple body organs, including the lungs, kidneys, heart, brain, skin, and blood cells, whereas sarcoidosis primarily affects the lungs and lymph nodes. Lupus is a chronic autoimmune disease that affects the immune system. It is difficult to diagnose lupus since its symptoms are similar to those of other illnesses. Sarcoidosis, on the other hand, is defined by the development of granulomas (groups of inflammatory cells) in numerous places of the body.

It is important to note that Lupus is an autoimmune illness, which means that the immune system of the body treats the body’s own organs and cells as if they were alien entities. As a result of lupus, inflammation occurs in various bodily regions, as well as the presence of typical symptoms such as tiredness and fever. When lupus flares up, a rash on the face takes the appearance of a butterfly’s wings, and this is one of its most distinguishing symptoms.

Sarcoidosis is most typically detected in the lymph nodes and lungs, but it may also be seen in the skin, heart, and eyes, among other body areas. Despite the fact that the exact origin or source of this illness is still unclear, the development of granulomas may be used to identify it. The vast majority of the time, they are detected by chance during a chest x-ray.

What exactly is Lupus?

Lupus is an autoimmune illness that is more frequent in women than in males. It may be deadly. The majority of lupus cases are discovered between the ages of 15 and 45. The symptoms of lupus are similar to those of other illnesses, making it difficult to distinguish between them in the first place.

Despite the fact that the butterfly-shaped face rash is striking, it does not present in all persons who have it. Lupus is triggered by a combination of genetics and environment, and both play a significant impact. People who are born with a predisposition to lupus are very sensitive to ultraviolet light. Skin lesions may develop as a result of prolonged exposure to the sun. Specific kinds of blood pressure drugs and antibiotics may also cause lupus to flare up in some people.

Fatigue and fever are prominent signs of the condition, as are skin rashes and skin lesions, breathing difficulties, discoloration of the fingers and toes when under stress, and memory loss, among others. It is possible for lupus to cause significant damage to many bodily organs, including kidney failure, blood vessel inflammation, an increased risk of heart attack, stroke, or seizures, among other things.

Despite the fact that there is no permanent cure for lupus, several drugs may be effective in reducing the disease’s symptoms. In the case of drug-induced lupus, altering drugs might aid in the patient’s rehabilitation.

What is Sarcoidosis and how does it manifest itself?

The exact etiology of sarcoidosis is still unclear, however, some specialists feel that it is the result of the body’s response to an unknown chemical or to its own proteins. Sarcoidosis is characterized by the creation of a small collection of granulomas (inflammatory cells) in any portion of the body, which may be found in any organ.

Sarcoidosis may affect anybody of any gender at any age, however, the majority of instances have been documented in people between the ages of 20 and 60. If there is a history of sarcoidosis in the family, a person is more likely to get the disease.

Although sarcoidosis manifests itself in a variety of ways, the most frequent symptoms include enlarged lymph nodes, swelling and discomfort in the joints, and exhaustion. Symptoms of granuloma formation in the lungs include shortness of breath and a chronic dry cough that lasts for many days. Sarcoidosis is characterized by lesions on the nose and cheeks, nodule growth beneath the skin, hazy eyesight, and irregular heartbeats, among other symptoms.

Sarcoidosis is less dangerous than lupus, but if left untreated for a long period of time, it may cause organ damage and even death. Occasionally, the illness is able to heal on its own. It should be noted, however, that failure to do so may result in the development of lung fibrosis, cataracts, renal failure, and facial paralysis.

Difference Between Lupus and Sarcoidosis

In both lupus and sarcoidosis, a variety of symptoms might manifest themselves at the same time. As an autoimmune disease, lupus is more fatal, whereas sarcoidosis is more likely to resolve spontaneously, without the need for any specific treatment.

There is no permanent cure for either of these diseases. Certain medications and treatments, on the other hand, can aid in their control. So, it is recommended to visit a doctor quickly if identical symptoms occur of any of the disorders. If the treatment is started in time then severe damage to any of the body parts can be prevented.