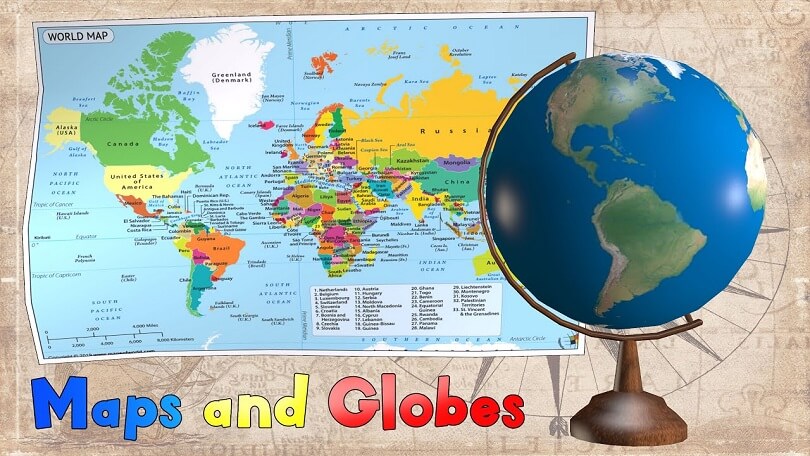 Two instruments that help us understand the geography and structure of the world are a globe and a map.

The primary difference between a map and a globe is that a map can be used to represent any part of the country (a city, two, or a country), but the globe represents the entire world.

What is a Map?

A map shows certain geographic locations as pictures or general outlines. It provides an aerial view of an area. You can choose to have maps either static or dynamic. Although maps are mostly used for showing geography, they can also serve to represent fictional worlds and spaces.

An atlas is a collection of maps. Atlases are composed of symbols, distance, and direction. The distance between any of the two points is determined by the scale used for each map. For large areas, a smaller scale is preferred. A larger scale is for smaller areas. The symbols of North, East, and South determine the direction.

There are three main types of maps: physical, political, and thematic. A physical map shows physical features like mountains, rivers, plateaus, etc. A political map shows the outline of cities, towns, and states. A thematic map shows roads and rainfall patterns and shows where industries are distributed.

Cartography is the art of mapping. A cartographer is a map-maker. Road maps are the very widely used maps in the globe. These maps are used to locate a route to a specific destination. Google Maps is a popular app that offers an online collection, navigation system, and offline map of your city.

What is a Globe?

The two main colors on a globe of Earth are brown and blue. The blue color represents water bodies and oceans, while the brown color is used for land. Latin for “Globus,” which is Latin for “sphere,” is the origin of the term globe.

Since the 3rd Century BC, we knew the Earth was a globe. Around this time, the first globe was created in modern-day Turkey. They weren’t as accurate as of the ones we have today. The globes of today represent continents, oceans, and countries of the exact same sizes.

The axis is the fixed point that allows for the globe to rotate about it. The axis aligns a globe in a slanting fashion—the needles on the axis point towards the north and south poles, respectively. Globes are available in many sizes and are made from a variety of materials, including glass, plastic, and other metals.

Principal Differences between Globe and Map

Geography is a vital field of study. We learn from it about the world around us. Geography teaches us about the places we live and the environment around us. It helps us to locate and navigate around places.

Both maps and globes have their strengths and weaknesses. In describing distance and direction, a map is more accurate than a globe. A map is also smaller, lighter, and easier to use than a globe.

Maps can now be found on smartphones for free! Globes are not free. Globes can be very expensive, depending on the material used.