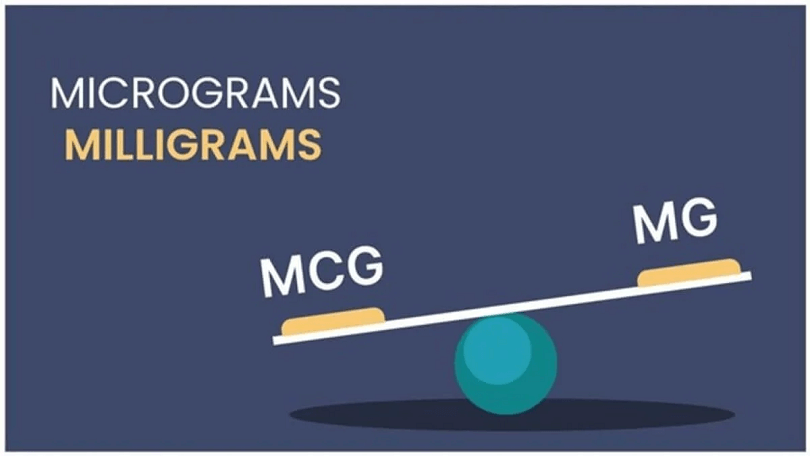 When you measure anything, you are quantifying it together with its properties in order to compare it to other things or occurrences. Number association with physical quantities of an item such as mass, length, time, and so on is the act of associating numbers with certain physical properties. The metric system, commonly known as the International System of Units, is the world’s standard system of measurement (SI Unit System).

In the metric system, the words “mg” and “mcg” are both used to denote mass measurements. In terms of measurement, they are very tiny units of measurement. A microgram is represented by the letters “mg”, which stands for milligrams.

The nutritional value of various food packs is shown in milligrams and micrograms. They are also used to show the presence of certain substances in cosmetics, pharmaceuticals, and other types of treatments, for example.

The most significant difference between mg and mcg is the size of the particle. For comparison, a milligram is equivalent to 10-3 grams while a microgram is equal to 10-6 grams. In medicinal chemistry and nutritional value calculations, both of these terms are often used together.

The conversion between milligrams and micrograms is straightforward and may be accomplished simply by dividing or multiplying the given amount by 1000, respectively.

A milligram is one-thousandth of a gram in weight. A substance’s weight is measured in grams, which is part of the metric system of measurement. The average person uses it in his or her regular activities. A weighing scale makes it simple to measure a material to the exact quantity that is necessary.

This measurement is also used to illustrate the distribution of nutrients on food labels, which is another use of this measurement. It shows us how many milligrams of vitamins and minerals are included inside a certain food product. The metric unit of ‘mg’ is frequently employed in the pharmaceutical industry to quantify the dose of a specific substance.

A milligram balance is an instrument that is used to measure milligrams of weight. It only provides us with a precise measurement up to the milligram unit of measurement, and nothing more. This kind of laboratory is often seen in a scientific or pharmaceutical setting. They use the balance in the course of conducting tests and determining the dosage of a specific medication.

To convert milligrams to grams, divide the amount by 1000 to get the equivalent in grams.

The amount should be multiplied by 1000 in order to convert grams milligrams into micrograms.

A microgram is one thousand millionth of a gram. In addition, it is utilized to determine the mass of material. This unit of measurement is significantly smaller than the gram and is not utilized by us in our everyday life.

A microgram is most often employed in the conduct of scientific investigations and the production of pharmaceuticals. The majority of the medications we take have a certain number of micrograms of a drug’s dosage. It is used less often in everyday life owing to the fact that it is only required for the most basic of measurements.

A microgram balance is used to measure the weight of micrograms. This allows us to make very exact measurements down to the microgram level. The accuracy of this gadget exceeds that of a milligram scale. It is also used in research labs.

If you want to convert micrograms to grammes, you must divide the figure by 1000000.

In addition, to convert micrograms to milligrams, the value should be divided by 1000 to get the desired result.

The most significant distinctions between mg and mcg

Measurement is crucial, and it can be found in practically every area of our daily life. Measurement is utilized in every situation, from measuring a few kilograms of vegetables to calculating the mass of the whole globe. Because kilograms are the standard unit of mass measurement, it is common practice to measure the mass of an item in kilos. Milligram and microgram are both fractions of a kilogram that are smaller than a milligram.

A significant amount of mgs is used in the food business. The nutritional breakdown on food labels is expressed in milligrams, which is the unit of measurement. It shows us how many milligrams of protein, fat, and carbs are there in a certain food product.

In order to produce pharmaceuticals and perform studies in a laboratory, just a little quantity of the material is required to get the desired result. This kind of approach makes use of micrograms of the chemicals that are necessary for the drug’s production or for the experiment’s execution. The dose of medications is commonly expressed in micrograms (mcgs).

The milligram balance and the microgram balance are both instruments used to measure milligrams and micrograms, respectively. They are capable of providing exact and accurate measurements of the unit of mass in question.