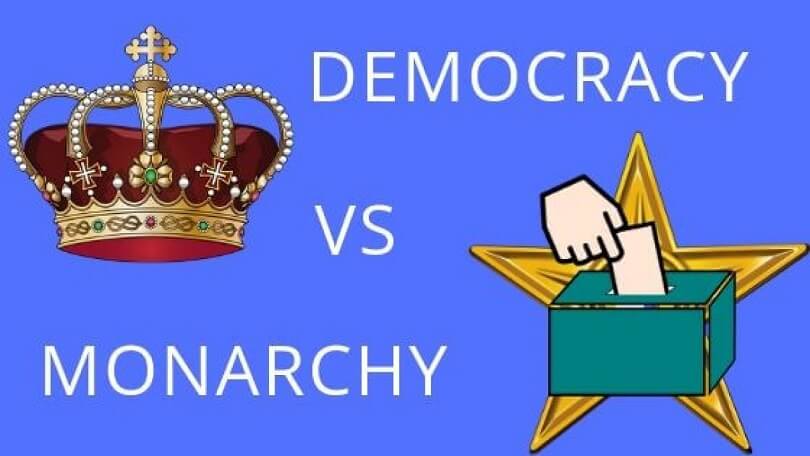 Every country is controlled or headed by a form of governing body, which is also known as the government of the country. It was carried out in order to uphold the law and produce rules and regulations. A single person was given supreme authority to handle everything under his authority at first. But eventually, people realized that giving all of the powers to a single person, commonly known as a monarch, would lead to him dictating and abusing his authority rather than resolving issues as intended. This theory gave rise to the concept of democracy, in which the people elect their own representatives to rule them.

Democracy has long been regarded as the most effective form of governance in the world. Democracy is the most commonly accepted type of governance, while monarchy is still practiced in certain parts of the globe.

Monarchy is a system of administration in which all of the authority is concentrated in the hands of a single individual. The position is earned via the hierarchy, since his family may have previously governed the country and hence deserved it. The democratic form of government, on the other hand, is a system of government in which the ruler is elected by the people of a country. He, together with the other branches of government, is in charge of the whole country.

In government or politics, monarchy is a kind of governance or political system in which a single person has the undisputed right to rule and govern. A monarch is a person who serves as the head of state of a monarchy. When the highest power of a state or nation rests in the hands of a monarch, who also serves as the country’s head of state, the word monarchy is used to describe the situation. The role of the king is mostly attained via bloodline descent.

It is possible to have political rights and power that are symbolic (crowned republic), limited (constitutional monarchy), or total autocracy in the hands of a sovereign monarch (absolute monarchy). He exercises his authority in a variety of ways, including via the legislative, the administration, and the judiciary. Kings and queens are often crowned with titles such as king, queen, emperor, raja, khan, and sultan, among other things.

Until the twentieth century, the monarchy was the most popular type of governance. People have gradually shifted their preferences toward democratic forms of administration, yet monarchy continues to exist in 45 sovereign states, including 16 commonwealth realms that are controlled by Queen Elizabeth II as their chief of state and government.

When the people of the country have the ability to pick their government, this is known as a democratic system of governance. The term democracy comes from the Greek word “demokratia”, which was formed by combining the words “demos” (people) and “kratos” (rule), which literally translates as “people’s rule”.

Diversity and inclusion are essential to democracy’s functioning. These ideas are reflected in the freedoms of assembly and expression that are guaranteed to all citizens, as well as the rights to life and minorities.

Difference between Monarchy and Democracy

Nations are governed by a variety of distinct types of governance. Prior to the twentieth century, the monarchy was the most favored form of administration, but as time progressed, people became aware of alternative types of governance, such as democracy, which they adopted. People began to fight for their rights and refused to be dictated to by the monarchy, and it quickly became the most popular form of government as a result of this movement. There are still 45 sovereign states that are ruled by the monarchy.

Monarchy is a type of administration in which the king, who is elected by hereditary rather than popular vote, serves as the head of state. He is not accountable to anybody for his acts, and no one has the authority to criticize or call into question his policies. Democratic government, on the other hand, is a system of government in which the leader is elected by the people, either directly or indirectly. Because he was chosen by the people, he is accountable to them for his acts, and his policies may be attacked or questioned if the people so want.