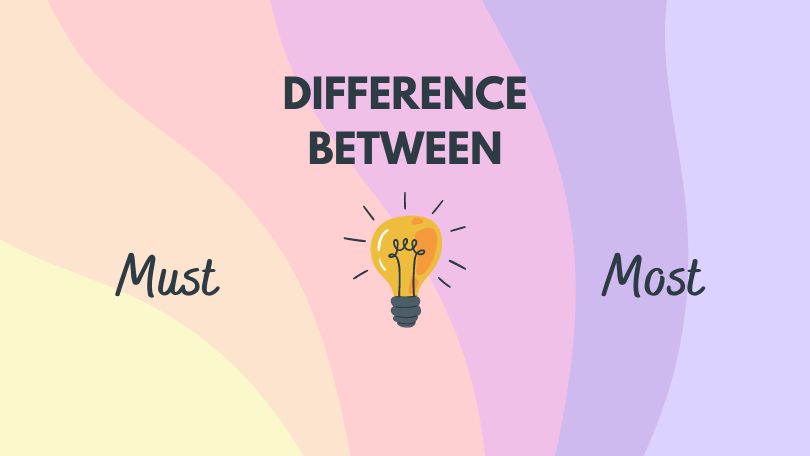 So many words are encountered in English that can be either confusing or contradicting. Such words include prepositions and conjunctions. It is common to get surprised by words that almost sound similar and even look the same. To make your speech easy to understand, it is important you know how to distinguish certain English words.

There are terms that can be used interchangeably because they are slightly different. However, only experts can explain what the differences truly are. Hearing these words regularly often brings more confusion leaving people thinking that these words are identical.

Auxiliary verbs can be used alongside the main verb to better explain the mood, tense, and even the voice of the main verb.

The main difference between these two words is that “must” confirm certainly while “most” is used to describe quantity. Must help to further express the certainty of situations while most focus more on quantifying situations.

Must is used to explain something that is about to happen or something that will certainly happen. The speaker in this case ensures that the subject will definitely follow the predicate. Examples of such statements include: ‘The sun has been up for a while. It must be hot outside,’ ‘The boys must have finished their homework by dinner time’.

Most on the other hand is used to show large amounts of something or show the majority in something. Examples include, ‘Most people like flowers.’, ‘Most school children are finding it difficult to study on the screen.’

Comparison between Must and Most

Must is something that is mandatory and is meant to happen. It is used to explain something that one ought to do that is of utmost importance. An example is: ‘You must fill out all the college forms for the economics department.’

Must can also be used to show that something is extremely urgent. It explains that if something is not urgently attended to, it may result in negative consequences. For example, ‘You must report to the exam room at a certain time or else you will be locked out.’ In such a case, must have been used to explain that failure to get to the exam room at the required time will result in failure. Failure is a negative consequence.

Most, on the other hand, is used to describe a huge amount of something. It can be used to quantify things and even people. Most only uses numbers to quantify something. The quantity is always large. For example in a sentence: “Most available fruits in the market, today are fresh.

Most is a term used to explain the greater case from a group of people or amount of things.

Difference between Must and Most

In conclusion, we can confirm that English is a language that is used widely all over the world. It has so many terms that are in most cases quite confusing to its users. While words that look similar can be interchanged in statements, understanding them better and their meanings are important.

Misuse of words in context can alter the message that we are trying to pass across. It is important to understand what particular words, especially those that look the same or have similar meanings mean, to avoid using them wrongly in phrases.

Must and Most are words that sound very similar. However, a deeper understanding of them will reveal that they are two very different words used in very different contexts. While must is used to ascertain situations and reveal that failure to adhere will result in negative consequences, most is used to quantify objects or people. Quantities are in terms of large numbers or those that have exceeded the expected number by half.