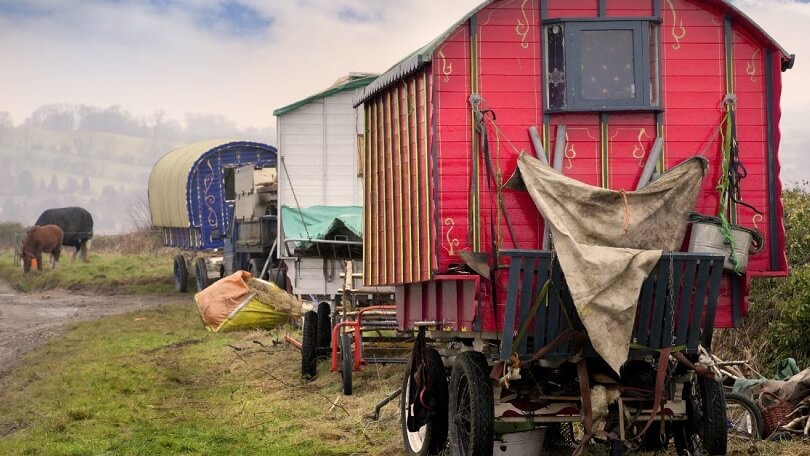 These are two groups of people that move from one region to the other. They do not stay in a particular area for too long. These groups of people have some similarities, and it can be confusing to tell which is which in terms of them.

The main distinguishing factor is that Gypsies are an ethnic group of Northern India and live in America and the UK. On the other hand, Nomads are a community of travelers that move from region to region occasionally. Gypsies can be nomads, but not all Nomads are Gypsies.

The major factor that differentiates these sets of people is that Nomads move around the same vicinity. Conversely, Gypsies are an ethnic group of people who are from Northern India, who travel to other regions with a carnival. It is in gypsy’s nature to travel from place to place; it is their form of habitation.

Nomads do not have a fixed habitation. They move from place to place, and their movement has a particular pattern. They also move from the same place to other regions and spend some time there. This gives them a chance to form habitation within this timeframe. It also ensures that their habitation does not get extinct.

Who is a Gypsy?

Gypsies are an ethnic group that came from Northern India and migrated to Europe and generally behave like Nomads. They are among the largest sets of minorities to ever grace Europe. They have rich traditions and family bonds. Even though these ethnicities are somewhat bizarre and exotic, they were continually harassed while in Europe.

Most people see gypsies as mysterious, shrewd outsiders. They are known for fortune-telling and psychic readings. They are also poets, playwriters, and composers. Shakespeare Cleopatra and the dark lady in his sonnets were inspired by the gypsy. A majority of this ethnic group had a nomadic lifestyle in the past. But this changed over time as most of them have established roots in permanent settlements. They prefer being called Romany, and their language originated from Sanskrit.

Some modern-day gypsies are in a nomadic tribe named Roma. They worship a goddess named Kali. The group name Roma is believed to have originated from a warrior class named Punjab.

The warrior class was during the Mohenjo-Daro time. It is believed that the many invasions in India made them want to settle elsewhere. They have since spread throughout Spain, Greece, Europe, Turkey, Morocco as well as Russia.

They are very resistant to marriages outside their community. Most of their marriages are arranged between families. The groom’s parents will be the ones responsible for finding the bride for their son. These marriages are between when the marrying couple is in their mid-teens. While single youngsters, on the other hand, are not left to socialize alone. This is a rule for the ethnic group, whether male or female. The girl’s chastity was cherished and protected.

Who is a Nomad?

Nomads are a group of people of a certain community that moves from place to place without permanently settling in any of these places. In many cultures and communities, there were nomadic traits and still are adapting to nomadic ways. These sets of people believe that they are from one ancestor. This enables them to foster tight family bonds of loyalty. The bonds of loyalty are seen clearly when a financial crisis and disputes is emanating from outsiders or the family.

The criteria of their culture were designed while keeping in mind the nature of their movement from place to place. Just like gypsies, nomads are seen as outsiders wandering by other people in society. For nomadic herdsmen, their movements are seasonal in search of grazing land and water bodies for their animals. But during such travels, they face a lot of hardship due to drastic climatic change as well as diseases. If there is any loss of animals along the way, it’s disastrous for the nomadic community because their lives majorly depend on keeping animals.

Moving from place to place makes them susceptible to sedentary opponents. They have to defend themselves and their livestock from these opponents. Their constant defending has turned them into warriors with excellent archery and horsemanship skills. They travel in groups that they have bonds with. They have informal agreements between them. Decisions in the group are made by males only, with some tribal groups. For instance, the Mongolian nomad group moves only twice a year.

They move during the winter and summertime. The locations and shelters are fixed permanently. The family traveling does not use a shelter. They find an open area so that the animals can graze.

Difference between Nomads and Gypsies

Nomads and gypsies are similar when you think of sets of people that move from one place to the other. But their characteristics are very different, for one, nomads have a fixed place they return to, while this is not the case in gypsies. Nomads also do not move with a carnival, while this is a factor in the movement of gypsies.

The nomadic group has informal agreements and ties. They only allow the group’s males to make decisions, while some have chiefs. They operate in infertile regions, but you can also find them in densely populated areas. Gypsies, on the other hand, belong to a nomadic tribe called Roma and travel in densely populated areas, mostly in Europe and America. They believe that the constant invasion in India made them want to find settlement elsewhere.