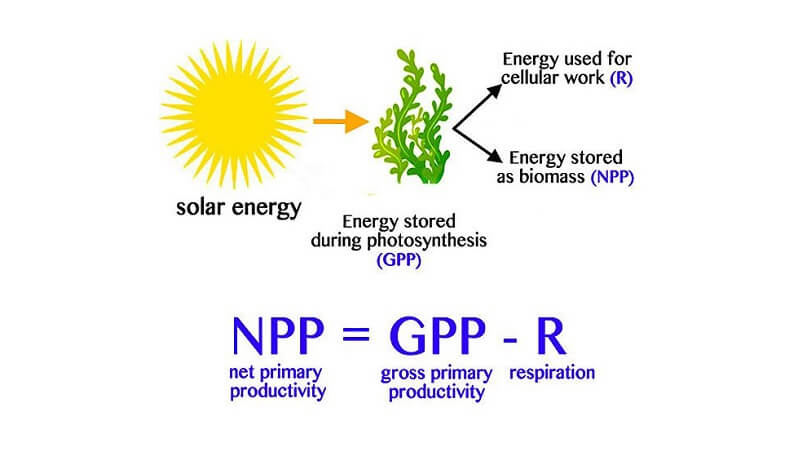 Primary productivity refers to the speed within which energy or sunlight is converted into organic matter using chlorophyll. However, some factors can affect primary production, including nutrients and light. The other factor contributing to a decrease in primary production is water.

A slight decrease in nutrients or light can easily cause a decrease in Primary Production levels. Primary production processes have to take place since it’s the foundation of a food chain. Therefore, if by any chance there is a disturbance, the entire food chain becomes broken.

With this in mind, this piece will cover the difference that exists between NPP (Net Primary Production and GPP (Gross Primary production). This includes what they are, how they are calculated, and what affects both of them.

NPP, on the other hand, stands for net primary production. NPP is defined as the rate at which each autotroph included in an ecosystem produces net chemical energy. This simply means NPP is the difference between the rates of total useful chemicals to the energy produced as well as the rate at which some of the useful chemical energies are used for respiration processes.

GPP on the same stands for Gross primary production. It’s defined as the rate at which every autotroph included in the ecosystem produces useful chemical energies. The chemical energy produced by a primary producer like autotroph, which is also known as carbon biomass, within a given time can is also referred to as GPP.

NPP refers to energy accumulation (biomass). Photosynthesis refers to a process by which plants make organic through sunlight. The organic matter created in such a process does not consume the whole energy stored. A fraction of one-fourth of energy is normally used in other biological processes.

The net primary product, however, does not include all losses. It only includes the organic matter contributed to a food web. Another calculation approach is by subtracting the energy loss caused by respiration from the gross primary product. Nevertheless, NPP depends on several factors, including humidity, temperature, and sunlight present within the environment, and is mostly high within tropical forest areas.

The net primary product changes depending on the season as well as the sunlight. A good example is Russia and Canada, as they have the highest NPP during the month of June and also July.

GPP or Gross Primary Production/ Productivity refers to the measure of the total organic energy produced using sunlight from a producer within a particular area. It is normally produced during photosynthesis. Each autotroph within the environment that is considered for the calculation and measurement are the producer of Gross Primary Production and are also part of the ecosystem. For the calculation of GPP, it has to include the energy that is used in other activities, which includes respiration energy.

If the GPP is reduced due to any reason, then the NPP will automatically be decreased in just the same manner. This is because Gross Primary Production/ Productivity is reliant on producers.

Difference between NPP and GPP

To build the right records and have the right comparisons, there has to be a measurement establishment in such a way that they can be useful, universal, and provide vital information. The same applies to the measurement of energy production. For organic energy to be easily specified, the GPP (Gross Primary Production) and NPP (Net Primary Production) have to be established for easy measurements and research to be continued and reach even the advanced levels.

The main example that proves these measurements assist in research is after the examinations and production of energies, lots of factors affecting them are usually outlined. Therefore, GPP (Gross Primary Production) is different but somehow similar to NPP (Net Primary Product) and aids in researching and comparing stuff to interested ones.

However, essential to note is that NPP and GPP both have an important role in the food chain development. This is why it’s important to ensure that the right measurements are achieved at all times to make it easy to identify factors affecting both the Gross Primary Production and Net Primary Product.