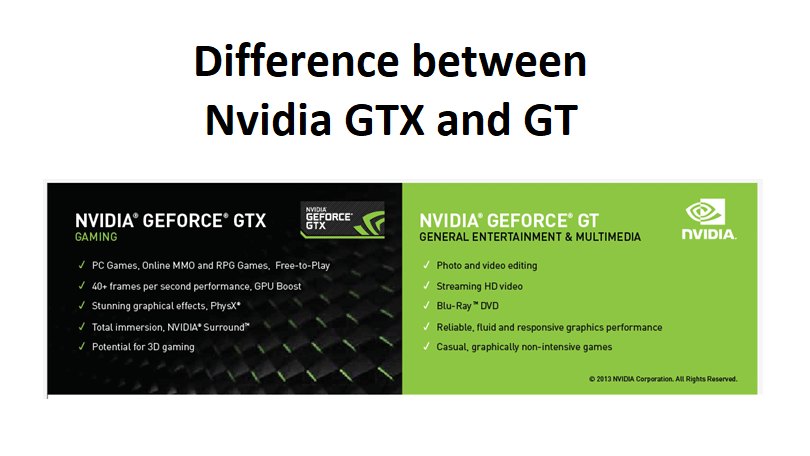 Some of the graphic cards series are purposely made for entry-level tasks such as office work, video editing, and playing older gaming versions such as GTA Vice City and NFS, among others. However, some graphic card series are more advanced and feature high performance. It can easily handle heavy video editing tasks play high-quality games such as GTA 5 and Witcher 3, among others.

The main difference between the Nvidia GT and Nvidia GTX lies in the fact that the GT series only handles entry-level tasks such as office work, older games, and light video editing. Nvidia GTX, on the other hand, has the ability to handle demanding and advanced tasks with no problem and is mostly used in playing the most modern games such as GTA 5 and Witcher 3 within a medium ultra-setting.

What is Nvidia GT?

Nvidia GT refers to a series of affordable and entry-level graphic cards created by Nvidia. Nvidia, on the other hand, is a well-known graphic cards company. The GT refers to gran Turismo meaning big car. The GT Series was created with the intention of targeting clients who didn’t wish to spend too much money on PC. Offices decide to use the GT series due to its affordability and do the work just well. Homeowners and parents also get to benefit from GT, especially if they are on a tight budget.

However, the GT series is not very popular among live heavy video gamers and live streamers. This is due to the fact that the GT series does not feature extra performance, something that professional gamers require. GT is, therefore, better for casual gamers since it is also a budget series. Therefore anyone that loves playing video games but doesn’t care about the graphics setting can choose a GT series.

Gamers that wish to experience the fun and nostalgia of the older days can also buy the GT series as it has the ability to run older games without any problems.

GT series is an entry-level series meaning the performance will be locked after reaching a certain level. The performance is limited by the availability of Cuda cores numbers and the memory clock speed. The video’s game frame per second rate is limited. The creator of this GT series also placed a limit on its performance.

What is Nvidia GTX?

GTX series is also popular within offices and homeowners. However, there is no specific hype with buying GTX. If your task can be handled at a lesser price, why pay extra for a performance that you will not even need?

Any person that is serious with gaming or for gamers that prefer live streams normally settle for GTX since high-level performance and playing within medium ultra-settings is vital for the.

GTX series is, therefore, high performance. The performance usually comes from the available extra Cuda cores numbers. The memory clock is also the higher speed within the GTX series, which improves the frame per second rate within video games.

Difference between Nvidia GT and GTX

The Nvidia GT series can be a better option for anyone with a tight budget and with no concern with performance. However, for people with enough budgets and the need for high performance, then the GTX series will always be the best option.