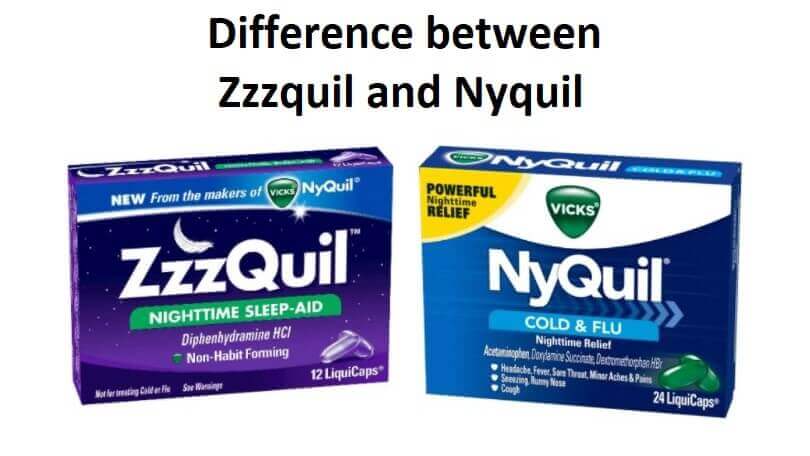 VICKS refers to a brand that is well known for producing different medications that offer relief to people struggling with a cough, cold, sleeplessness, and running nose. The brand belongs to an American company. The medicines can easily be purchased directly by the consumers in any medical store. The brand sells a wide range of medications, with Nyquil and Zzzquil being the most popular ones.

There are lots of differences that do exist between Nyquil and Zzzquil. One of the underlining differences is the fact that Nyquil is used in relieving fever, cold, cough, and sleeplessness. Zzzquil, on the other hand, is used when for bringing in a good night’s sleep but does not offer relief from any other issue. However, they both feature the common sedating ingredients known as antihistamines.

Nyquil refers to a medication produced by VICKS, which is a trendy brand. This medication features drugs that include doxylamine, antihistamines, Dextromethorphan, and Acetaminophen. These drugs are responsible for assisting the body by relieving cough, cold, fever, and importantly helping with sleep. Nyquil was launched within the late 90s in the United States, with Dyaquil being its sister medication.

Zzzquil, on the other hand, is a medication manufactured by VICKS, an American brand commonly known due to its medication production. The medication features antihistamines and also diphenhydramine. These drugs aid in sleeping problems by ensuring that an individual gets a good sleep. The medication was recently launched and is available in different medical stores without any prescription.

When experiencing a cold, you will notice that other symptoms come with the cold such as sneezing, headaches, infections, and chest pains. This means you must look for relief for such symptoms. You cannot have better sleep and rest while having a running nose and constant coughs. It is also not easy to get a single solution to all of these problems with just a single medication. Nevertheless, Nyquil has made it possible to have a good night’s sleep. The drug is like an all-in-one relief for all cold problems and symptoms.

This medicine has quickly managed to provide temporary relief to the cold and flu symptoms. Some of these symptoms the medicine has managed to tackle include throat infection, coughing, minor chest pain, fever, sneezes, and running nose, among others.

The medicine features different active ingredients, including Acetaminophen, which acts as a pain reliever and fever reducer. Dextromethorphan, on the other hand, is responsible for suppressing cough, while Doxylamine succinate, commonly known as Antihistamine, acts as a sedative. The ingredients are usually mixed within a 30 ml bottle, with Acetaminophen being 650 mg, Doxylamine succinate 12.5 mg, and Dextromethorphan HBr being 20 mg. the medication also features other ingredients, including sodium and potassium.

Sleep plays an important role in human life. It highly contributes to proper growth and also development. More so, sleep is vital in making sure the mind and body are relieved of stress. Nevertheless, there are lots of people who have a problem when it comes to sleep. This situation can arise due to several reasons, and the best solution is to make use of sleeping supplements. As much as it is not a recommended option, it is one of the few solutions that work just right. Zzzquil features a wide range of products that aid in ensuring good and better sleep.

ZzzQuil Warming Liquid features a non-habit-forming ingredient known as Diphenhydramine HCI. The ingredient aids a person in falling asleep. Every 30 ml bottle comes with 50 mg of the drug. The liquid guarantees 8 to 10 hours of sleep. However, it does not assist with fever or cold problems.

Other Zzzquil products also aid in sleep. They include products such as the ZzzQUil ULTRA Tablets, ZzzzQUIL Night Pain Liquid, ZzzQuil Alcohol-Free Liquid, and Zzzquil Pain GelTabs. All of these products have undergone proper testing by doctors. Due to this, the products are highly effective and have managed to assist millions of people to have a better sleep.

Difference between Nyquil and Zzzquil

Both Nyquil and Zzzquil are highly recommended by doctors meaning they bear no harm to the human body. The two medications also feature common ingredients. However, they are very different in terms of purpose. They each offer different relief to various problems. Zzzquil aids in providing better sleep for people with sleeping problems.

Nyquil, on the other hand, is considered an all-in-one medicine with the ability to offer relief to different problems such as the common cold and also provide sleep.

Both of these drugs are important as long as they are being used for the intended purpose. It is therefore important to ensure that they are not misused in any way. You can always consult with your doctor in case you have any doubts. They are better positioned to offer the right advice and recommend the right dosage.