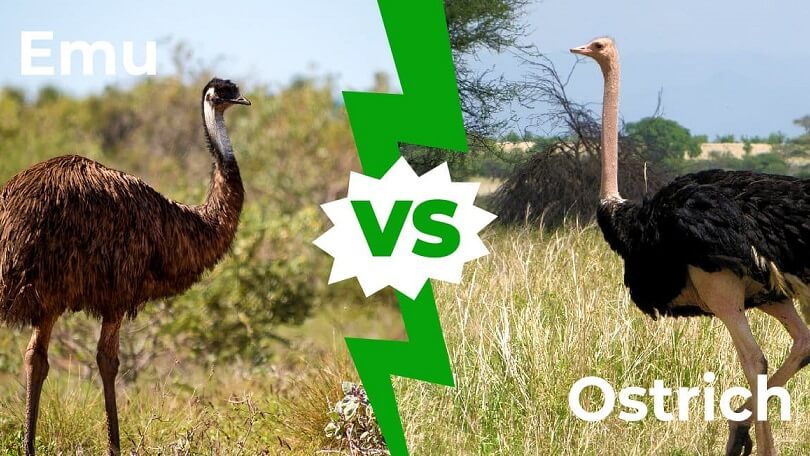 Nature is incredibly varied, with almost 8.7 billion species on the planet and many more still to be found.

Birds are classified into two groups: those that fly and those that do not fly. While the anatomy of both groups is relatively similar, the morphology of the birds differs significantly. The flightless birds have developed and adapted in a different way than other birds, and they are capable of surviving on the ground, in contrast to other birds.

This group of flightless birds is made up of a variety of species that are typically huge and long-legged. Ratite has a smooth sternum (breastbone) and does not have a keel, which is where the flight muscles are placed and which aids in the movement of the wings.

While both Ostrich and Emu are enormous animals, the primary distinction between the two is their height and weight. Ostriches are the largest of the two, reaching heights of 7-9 feet and weights of 145 kilograms, while Emu is typically between 5.5 and 6 feet tall and weighs 36-40 kilos.

Both the ostrich and the emu are flightless and descended from a single ancestor; they have a body shape that is strikingly similar to one another and are often regarded as the strongest and quickest of all birds.

What is an Ostrich?

The ostrich, or Struthio camelus, is a flightless bird that belongs to the genus Struthio. They are the biggest of the species, and they have the potential to run at speeds of up to 70 kilometers per hour.

They were formerly prevalent throughout Asia, Africa, and the Arabian Peninsula, but have now been restricted to scorching savannas and African forests as a result of heavy hunting and extinction in the respective areas.

They are omnivores, however, they favor plants above everything else and graze on roots, seeds, leaves, and flowers. However, they may sometimes be seen devouring insects such as locusts, snakes, and lizards, which gives the impression that they are eating them. They also consume stones, which aid in digestion by grinding the food as they ingest it.

It is believed that there are five separate species of Ostrich, each of which differs on a microscopic level in terms of color and body size.

Males have striking black and white coloration, which they utilize to attract ladies. They also use the spread of their wings, which can reach up to 2 meters in length, during the mating ritual to lure females to them. The females, who are typically light brown in hue, undergo a significant color shift during mating, with their feathers becoming silvery in appearance. The ostrich has a lifetime of around 50 to 75 years.

Emu’s scientific name is Dromaius novaehollandiae, which means “New Zealand Emu”. The term Emu is derived from the Arabic language that literally translates as ‘big bird’. They are mostly found in Australia, where they are the biggest bird in their natural habitat while being the second largest bird in the world overall.

They fly at a speed of 50 kilometers per hour and have feathers that are rather short in comparison to their body size.

They are omnivores, like the ostrich, although they are mostly herbivores, and their survival is dependent on the availability of pasture. They eat a broad range of leaves, grasses, seeds, and native flowers, and they sometimes prey on aquatic plants. Insects such as grasshoppers, snails, and caterpillars are often ingested by them, and they frequently swallow stones to aid in the grinding of their diet.

It is customary for them to mate throughout the summer and fall, which is distinguished by the changing of the color and feathers covering the head and neck. They also emit noises to indicate that they are ready to mate with another individual.

During the incubation of the eggs, the female departs, and the male takes care of the eggs and may go months without eating, during which he loses enough weight to be considered pregnant. The sound generated is low and deep, and because of the low frequency, it is difficult to capture. The life expectancy of an Emu in the wild is around 10-20 years, however, it is 35 years in captivity.

Difference Between an ostrich and an emu

Despite sharing the same ancestral background, both the Ostrich and the Emu exhibit signs of the evolutionary process and its effects. The differences in body structure, color, and factors such as speed and agility are influenced by differences in region, environment, and availability of food sources.

The morphological examination, in which color, size, and toes play a significant part, allows for the differentiation of the similarities in the shape and feeding habits between the two animals.

Since many flightless birds have been extinct as a result of unrestricted and widespread hunting and poaching, it is vital to keep an eye on their number and the regulations that govern their protection.