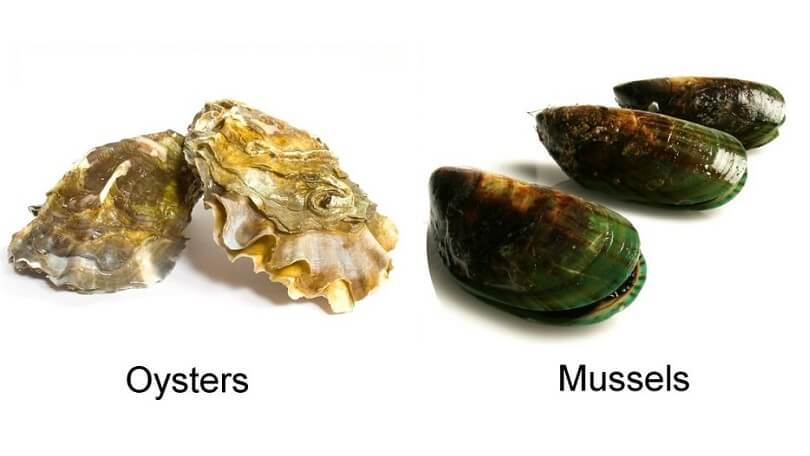 Oysters and mussels are both types of shellfish that are members of the mollusk family. Both of these animals are normally raised or harvested for their meat or to be consumed as seafood.

Oysters are also well-known for their capacity to create natural pearls, which is a rare and valuable commodity. Similarly, mussels have the potential to make pearls; however, this is not something that they accomplish on a regular basis.

Generally speaking, the shell of an oyster is oval in form. While its inner surface is often white in color, the outside surface may be any of the following colors: dark grey, white, blue, purple, or brown.

oysters are bivalve mollusks that mostly inhabit marine environments but may also be found in freshwater bodies of water, such as rivers and lakes. Their barnacle-covered oval-shaped shells are hard and rough, and they have a rough surface texture.

Since ancient times, humans have used oysters as a source of nutrition. Their cultivation has been traced back to the Roman Empire when it was first discovered. Currently, they are regarded as a delicacy due to the vast variety of taste profiles and high nutritious content that they provide consumers.

Oysters are fertilized from inside, rather than outside of them. They self-fertilize and generate millions of eggs in a matter of hours, usually less than six hours. These eggs hatch into larvae, which must attach themselves to a host in order to survive. Following that, they establish a permanent home for themselves where they may develop to their full potential.

Oysters come in a variety of shapes, sizes, and kinds. It’s interesting to note that their taste is influenced by the area in which they reside. European flat oysters, Pacific oysters, Olympia oysters, Kumamoto oysters, Dredge oysters, Rock oysters, and other edible species of oysters are among the most popular.

Mussels are edible bivalve mollusks that are usually found in brackish water and are classified as bivalve mollusks. They have smooth shells that are oblong in form, with extended ends on both ends. The hue of their shells is often purple, black, or brown in appearance.

Mussels are often born as males and then mature into females as they mature. The fertilization of these shellfish occurs on the outside of the oyster. Upon hatching, the mussel eggs develop into larvae, which attach themselves to the fins and gills of nearby fish. When they are adults, they prefer to live in symbiotic colonies in which they are reliant on one another for their own existence.

Mussels attach themselves to rocks and other surfaces by threads known as ‘byssal’ threads, which are derived from the Greek word for “byssal”. These threads are well-known for their tensile strength. At the moment, scientists are working on developing a mussel-based adhesive that may be utilized during eye surgical procedures.

There are about 17 species of mussels that are suitable for ingestion by humans. Mussels are available in a variety of edible kinds, including Blue Mussels, California Mussels, Mediterranean Mussels, Pinna Carnea, Perna Perna, and others.

Difference Between Oysters and Mussels

There are several similarities between oysters and mussels. Both are members of the mollusk family and are sometimes mistaken with one another. Their shells, on the other hand, are a fantastic method to identify the differences. While the shells of oysters are uneven and rough, the shells of mussels are smooth, which allows them to travel more easily through mud or sand.

Both shellfish and mollusks have been utilized as food sources from the beginning of time. Despite the fact that oysters are the more expensive of the two delicacies, mussels are finding their way onto more and more gourmet menus these days. This is due to the fact that they are fast and simple to prepare.