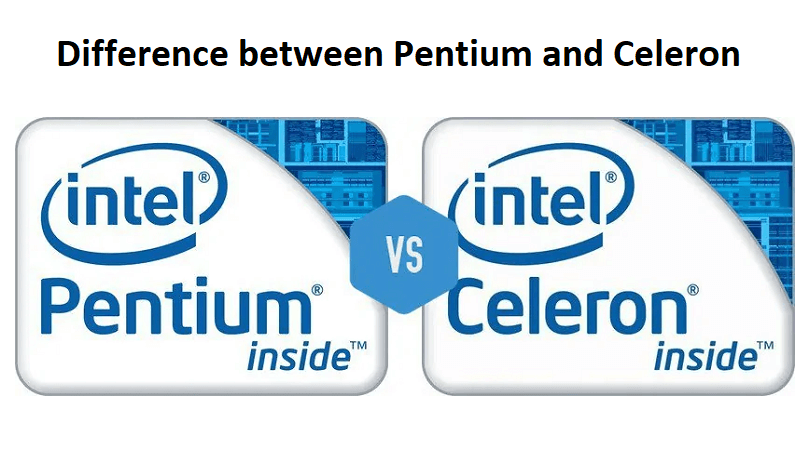 Intel was originally founded on July 18, 1968, and is the largest and most successful manufacturer of semiconductor computer circuits. It has been the largest microprocessor business in the last two decades.

Computers use processors and microprocessors, which are tiny chips that receive input and generate output. These chips are responsible for performing all calculations that are associated with computing.

The main difference between these two chips is in their cost and power. The Celeron chip is less powerful and a cheaper alternative to the Pentium. Regardless of this difference, the results given by both during the performance are outstanding. They do not jeopardize the needed value, despite them being pocket-friendly.

The Pentium microprocessor has four different versions. That is, Pentium to Pentium 4. They get more powerful as they progress. Celeron on the other hand is designed for low-cost PCs and does not have any versions.

Comparison between Pentium and Celeron

Pentium is in other words referred to as the Intel Pentium and belongs to the Intel family. It is part of the x86 microprocessors. Initially, before the Pentium came to place, there used to be the 80486 processor and the P5 family processor in 1993. These were in place before Pentium was introduced.

Pentium when compared to these two processors that were initially in place, the speeds are higher. The Pentium speeds are at 60 MHZ and 300 MHZ. The word Pentium originated from a Greek word that means ‘five’. This term is used to confirm that Pentium is now the fifth processor in the Intel family.

While Pentium was introduced into the intel family in 1993, its successor is the Pentium pro which was later introduced in 1995. This later version was the very first microprocessor to obtain the high-speed integrated level 2 memory cache.

Several powerful chips have been introduced after that and by the time we got to the 2000s, there had been 4 powerful Pentium chips. Three major advantages of the Pentium chips are that they are classic, cost-efficient, and designed for entry-level PCs. Pentium 4 is the latest processor and is the longest-serving after it was introduced in the Intel family.

Communication between other devices and the processor is referred to as the Bus. Depending on the speed of the bus, data can enter and leave the processor case.

The highest recorded Pentium bus speed is 1066 MHZ. It means that the Pentium can communicate with other PC devices to allow for proper performance.

When the Celeron speeds are compared to those of the Pentium Processors, they are less powerful and even designed for low-cost PCs. Most Celeron processors run at a speed of 1.4 GHz or less.

Another comparison with the Pentium processors confirms that the Celeron is slightly slower in performance. They have a low cache memory. Celeron chips have over time moved to the Pentium III and Pentium 4 designs and are relatively cheaper when compared to the Pentium.

Difference between Pentium and Celeron

The Intel family has been working hard to produce the best micro-processing chips that will enhance the performance of PCs. It has not produced the Pentium and the Celeron chips. While the intention was that the Celeron replaces the initial, they have allowed working of both except that they have a few differences in performance.

The Celeron chip when compared to the Pentium is relatively cheaper and is designed for low-cost PCs. However, this does not mean that it performs poorly. Its speeds are meant for these make of computers and it delivers exemplary well in them.

The only downside about the Celeron chip is that it does not have two important functions. That is microprocessing and hyperthreading. This makes it slightly cheaper than the Pentium. It also does not have different versions of itself.

The Pentium on the other hand is high-performing and with exemplary bus speeds that allow great communication among the devices. They are designed for high-end PCs and are slightly pricier when compared to the Celeron.

It supports microprocessing and hyperthreading. To eliminate the confusion that mostly happens between these two, it is good to have an understanding of both and how they work. Their speeds as well as their performance.