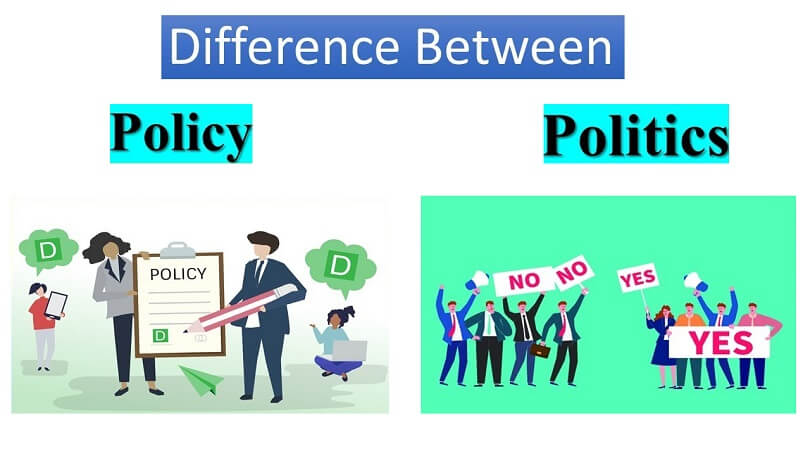 Every business is driven by a single primary goal: to become the best it can possibly be and to be better than it was before. In order to achieve this aim, an organization or even an individual must adhere to a variety of rules. These policies aid them in the decision-making process. Along with policies, there are a variety of approaches to putting them into action, all of which entail politics.

The most significant distinction between policy and politics is that policy is essentially a guideline or a collection of regulations, while politics is the real activity of governing itself. There are numerous policies in place for different organizations, countries, regions, and enterprises, and each one must be adhered to. In Politics, various strategies are used to achieve different results.

Policies are courses of action, concepts, rules, and laws that have been established or suggested by a person, group, organization, or country in the past or that are now being considered by them. Everyone who is a member of the engaged organization or region must agree to and abide by the policies outlined in this document.

Some strategies or actions that are conducted for the purpose of controlling any group, organization, or country are known as politics. In politics, there is no set of norms or set of tactics that must be followed at all times. It is entirely dependent on the organization, the association, the scenario, and, last but not least, the personal preferences of the participants.

In layman’s words, a policy is a specific plan of action, principle, or standard of conduct that has been previously accepted or advocated by a person, group, or institution. Policies often demonstrate a strong feeling of dedication to a certain goal or set of goals. Every person who is a member of that specific group, organization, or country is required to accept and adhere to the policies of that organization, association, or nation.

The phrase derives from the words “policie”, which is an Old French word, “politia”, which is a Late Latin word, and “politeia”, which is a Greek word. The policy is a planned and designed set of principles that are meant to lead numerous public sector organizations and groups, the government, or even individual actions in order to accomplish coherent outcomes in a timely manner.

Generally speaking, policies are statements of purpose that are intended to be put into effect or executed throughout a specified period of time. These rules are often intended to provide protection and punishment, as well as to improve the overall performance of a given business.

Policy research is the process of developing new policies, concentrating on crucial decision-making, planning, goal-setting, and looking for alternative plans or policies, among other things. Policies are critical for the development of society. This is why it is more necessary than a policy to have a good plan in place. Certain rules may be repealed in a democratic setting by signing petitions and performing the proper procedures to do so.

To put it another way, politics is a collection of actions that are involved with the process of decision-making. This process occurs in groups, and there are different sorts of powerful connections between people, such as settlements and acquisition, that take place. The word politics refers to the exercise of authority or power, as well as the development of a political solution.

It is a process that incorporates nonviolence, bargaining, and compromise that is referred to as a “Political Solution”. An authority or both parties come up with this solution in order to avert a quarrel, violence, and additional financial damage. The solution is advantageous to both parties involved. The study of politics is almost always an element of every social interaction at every socioeconomic level.

It doesn’t matter whether it’s with friends, family, at work, in a group, in a state, in a nation, or on a worldwide platform. In the field of politics, there is a diverse variety of alternatives, approaches, and methods to choose from. Others may not even be the proper ones in certain cases. On a variety of themes, it also entails the promotion of one’s own political viewpoints with other individuals. Every political party has its own motivation, agenda, viewpoints, and ideals, all of which are unique.

Politics is the process of putting a strategy into action. It is up to the person or organization to decide how to carry out the strategy. Politics is an organizational activity that is inextricably linked to the functioning of the state system. It is often characterized as a science or art of managing or administering a government or administration.

Policies may be defined as the procedures that are designed in order to fulfill social, political, managerial, financial, and administrative objectives in a coordinated and systematic manner. When the relevant rules are in place, the company may expand and improve over time. Politics is something that every organization, government, and group is involved in. There is no way for a single individual or organization to escape it.

Politics is the expression of one’s socio-political beliefs and viewpoints. It also entails manipulating choices and carrying out all of the operations necessary for the governance of a company or a country. It is equally important for political parties to be visible in the public arena. When it comes to politics as a concept, there are many different definitions, as well as many different approaches to what politics is, as well as its benefits and drawbacks. In addition, there are a variety of differing perspectives on whether it is a good or harmful thing.