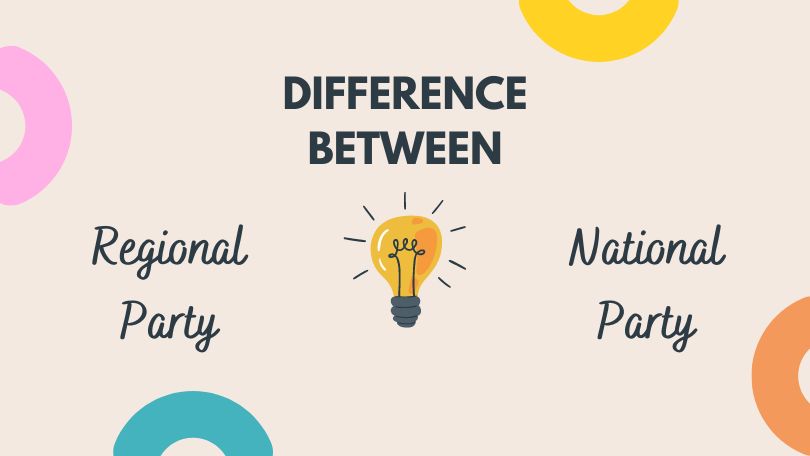 We see many parties in public life. And all work on different ideologies. We generally refer to them as political parties.

There are many differences between these parties due to their different features. One party is distinguished from the other by their focus on the specific subject matter and where they operate. This is why you will find the terms “Regional Party”, and “National Party” in their respective names.

A Regional Party is a party that is established in a specific region and primarily targets a particular state to represent it or its people. Conventionally, it is assumed that this type of party’s activities will be restricted to the state in which it is registered. A National party, on the other hand, takes a holistic interest in the country’s political issues as well as other matters that may impact the country and its citizens.

If a political party wants to be designated a National Party, it must be present in at least four states. The Election Commission in a country has absolute authority to decide whether a party is national or regional.

We will discuss a political party that is a regional political party and focuses on micro-level issues affecting one state or region. These political parties are interested in influencing issues that have an overall positive impact on a state and its citizens.

Although a party in a region may consent to other parties on national issues, they can hold their authority for a shorter time. This could be because these parties don’t have the resources necessary to work at a national level, or perhaps the party’s fundamental view is to use all its resources to concentrate on the region and follow certain directions based on its political perspective.

The National party has a wider perspective. It prefers to influence key political decisions that impact the entire country by focusing on political issues at a macro level.

It is necessary for a national party to operate in at least one state. It can then claim they don’t allocate all their resources to one state, and that their work on political issues is not directed to the side that determines the decision-making at the national level.

Difference between a Regional and a National Party

A party registered in a state is a regional party. However, a party that is not focused on regional issues is allowed to operate in more than four states.

Regional Party focuses all its political resources in a particular region. It may not be strong enough to operate outside its region. Or maybe its main goals are to never take part in national affairs. However, if the party is required on a particular issue to influence its people to choose a side or take part in a matter, it will consent to the national party with which its core beliefs are similar.

There are approximately three thousand registered political parties to the Election Commission of India in larger countries such as India. Only eight of these parties are National Parties, while the rest are Regional Parties. Keep in mind that a party must meet certain requirements set by the Election Commission before the EC can determine whether the party should be considered a regional or national party.

What role does an opposition party play?

In a democracy, resistance celebrations do several vital features. These include interest gathering: Political parties play an important role in aggregating the interests within the political community. The rate of interest gathering frequently finishes in the expression/projection of certain choices, values, as well as ideologies right into the plan, as well as the law-making process, e.g., in Parliament, as well as in the budgeting process.

The Opposition maintains contact with the voter-citizen and demonstrates the importance of national politics for citizens, that is, those who are marginalized, oppressed, or powerless. Opposition parties demand that the federal government be held accountable for any payments or non-inclusions.

Opposition events are a sensible alternative to the federal government. They offer alternative ideas, concepts, and plans for governing culture.

Must the celebration in power allow the citizens down, the “government-in-waiting” takes control of the regime of power, through free, as well as reasonable political elections. The function of opposition parties is to train future leaders.

What is a political party alliance?

A political alliance is a contract that allows for the participation of different political parties according to a common political agenda. This is usually done to oppose an election and mutually benefit from clearing election limits or taking advantage of other features of the ballot system.

A coalition government is formed when a political alliance gains power or when a plurality of the vote has not been achieved. Additionally, a variety of celebrations must interact in order to control.

Why do political parties need symbols?

Back in the 1800s, “a symbol” was worth a thousand letters. They didn’t have the interaction tools we have today.

Individuals were also not as well-literate as we are today. It was easy to tell others what you represented using a symbol.

All political parties have one primary goal: to represent their people. However, key characteristics such as the number of people it represents, its geographic scope, how active it is in solving people’s or political problems at the highest level, and how it uses its human resources, determine whether a party is a regional or national one.