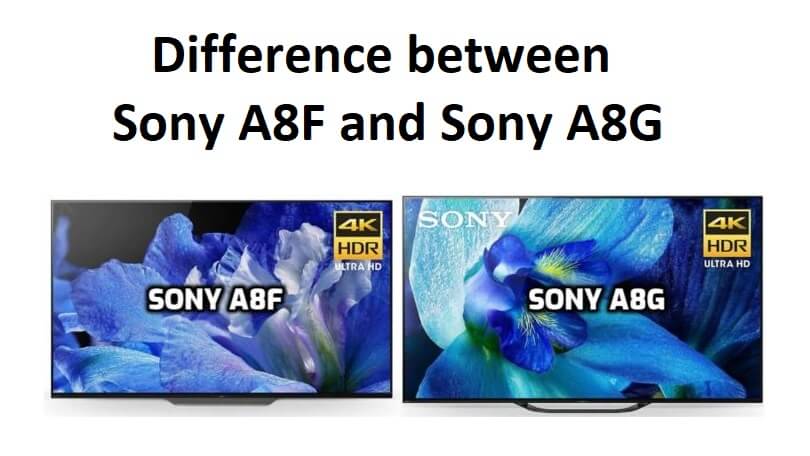 The launch of Sony’s OLED TVs highly contributed to the revolutionary development of other OLED televisions. These TVs feature the best sound qualities with high-quality viewing experiences. All this is due to the television’s ability to provide an intense clean black display.

The interesting part with Android TVs is the featured apps. In addition to the many installed applications such as YouTube, Amazon Videos, and Netflix, among others, you also have the chance of downloading a wider selection of other applications through the Google Play Store.

With this in mind, let’s dive in and better understand the Sony A8F and A8G.

Sony A8F release was in 2018. The Sony A8F is famous owing to its upscaling and impeccable video and sound quality. The Sony A8F features two types: the 65 inch and the 55 inches. The TV stand or foot is smaller and occupies a smaller area than its predecessors. The TV’s back is also compartmentalized. The Sony A8F is also packed with X1 Extreme processors. The processor is responsible for the sharp colors and grainy display.

While the TV is simply amazing, you won’t get enough of the contrast. It features an infinite ration contrast. The ratio means the TV has the darkest color. The ratio is due to OLED TV’s ability to turn off different pixels when there is a black color is on the screen.

With Sony A8F, you don’t need to dime the TV as it has no backlight. This feature makes it perfect for gaming. The Sony A8F TV has a glossy screen with impressive resistance to reflection, thus providing an excellent viewing experience.

The Sony A8F will upscale a 480p and 720p video to the best quality video. The 1080p and 4k videos are also easy to display on the TV. Nevertheless, nothing comes without some downfalls, and the Sony A8F also has its setbacks. To start with, the TV only features two HDMI cables. While this is okay, it limits individuals who wish to connect more than two devices for better 1080p viewing.

The Sony A8G features a Sound from Picture reality. This feature greatly improves the TV experience as there is no lag between the sound and the picture being displayed. The main disadvantage with the TV is the fact that the TV’s remote is exceptionally large and chunky. The remote also works under the principle of InfraRed radiation. This is challenging for many people as the signal can be spotty and might not create the desired commands.

The Sony A8G also has two HDMI cable options meaning it cannot connect more than two devices simultaneously. However, the TV has a built-in Chromecast application that allows individuals to cast videos from YouTube to the TV. It also features the Google Nest Mini with a pre-installed Sony Android TV and Oreo TV 2019 version.

Comparing these two televisions is not an easy task. The difficulty is owing to the fact that Sony has continued to create OLED televisions with lots of features that baffle technology nerds. Therefore, both the Sony A8F and A8G are of better quality, with each having its own standing point. The A8F offers a wider range of unique features, from vibrant colors to better sound quality. The presence of the Android TV and built-in applications such as Chromecast and Google Assistant creates a convenient experience.

Nevertheless, the Sony A8G stands out by a very tiny margin. This is due to the fact that it features a better interface when compared to its counterparts. The interface is responsible for the TV’s ability to shift between streaming channels such as Hulu and Netflix, among others with any problem. Additionally, the TV possesses an improved version of the A8F features. The 4K HDR performance improvement simply makes this TV one of the market’s clearest OLED TVs. This makes the A8G the best choice to go for when you wish to enjoy an ultimate viewing experience.

Important to note is that both TVs have their own flaws. They are both vulnerable to permanent burn-in, especially when displaying static pictures for long hours. Additionally, since the TV doesn’t have backlights, the peak brightness reached by the OLED TV is not as bright as the one reached by an LED TV like the Sony X950G.

It also stands out among gamers due to the clarity provided. Therefore, if you are stuck on which TV to go for between the aforementioned TVs, then this piece will certainly help you reach a better decision with ease.