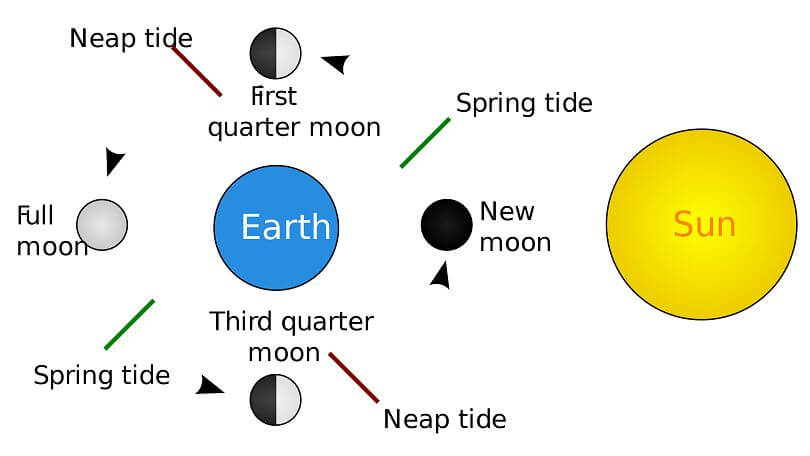 Spring and Neap are both tides. They are long waves that roll along with the earth while the ocean is pulled back and forth by the gravitational pull of the sun and moon. These interactions between these celestial bodies occur monthly or yearly. When the sun, moon, and earth are almost in alignment during full or new moons, tidal ranges are large, and they usually occur twice a month.

The moon will appear dark when it’s between the sun and the moon. And would appear full when the earth is between the sun and the moon. In both instances, the sun’s gravitational pull will be added to the gravitational pull of the moon on earth. This causes the bulging of the ocean more than usual. This means that higher tides will be slightly higher, and lower tides will be lower.

One major distinguishing factor between Spring and Neap tides is when talking about higher tides and lower tides for Spring tides. They are always more significant than the average tide. Spring tides are not experienced in the Spring season, as the name suggests. The name is derived from a phenomenon of springing forth. They happen twice in every lunar month in a year, not following seasons.

After some days after the spring tides occur, the sun and the moon will face each other at right angles. The bulge would occur as previously stated, but the unique thing here is that the bulge occurring due to the sun would cancel out bulges occurring due to the moon. This interaction will produce small tides called neap tides.

What are Spring Tides?

The full moon and new moon usually occur twice a month. During such times, the moon and sun associate in alignment to exert pressure on the ocean. The result is the occurrence of spring tides. The gravitational pull of the sun and moon join together to cause a much more tidal range. The tides lower tides are higher than usual, while the higher tides are stronger than usual.

They are massive tides that derived their name from their springing nature. The action of the ocean springing up and springing back. There are times when high tides are higher and lower tides are lower. If a spring tide happens to occur in March equinox or even September equinox, then they are referred to as equinoctial spring tide.

During this time, you can expect a massive tidal range of the year. This is because the equinoxes of the sun and moon are in a straight line with the equator. Furthermore, when the full moon or new moon is closest to earth, the phenomenon is called supermoon or perigee. It produces an even more considerable variation known as perigean spring tides when it occurs.

When the moon and sun are furthest from the earth is referred to as apogee, which causes smaller tides that are 2 inches. They are called apogean spring tides.

What are Neap Tides?

The word neap was gotten from an Anglo-Saxon word that means without power. The ocean will take some time to catch up with the geometry of the moon.

The gravitational pull is felt in the ocean. They happen seven days apart. And its effect is seen on these two types of tides. They may seem similar as they are both tides but how they occur is different from each other.