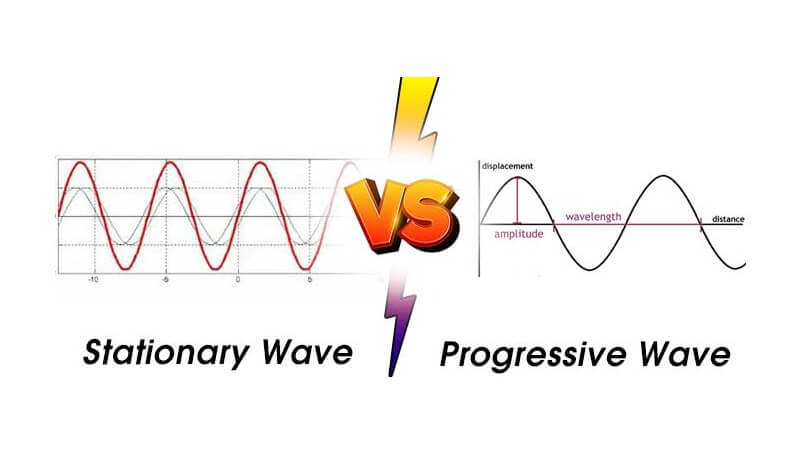 There are two types of waves, namely stationary and progressive waves. They are categorized this way solely on the energy constituent of waves. When talking about the stationary wave, you will note that no massive energy transfer is seen as energy is trapped in a medium. In contrast, progressive energy is transferred in molecules to reach a particular point.

Since the energy in the stationery wave doesn’t propagate onwards, you’ll find that particles at the node areas are surely at rest while the rest of the particles rest for a short time. While in the progressive wave, particles are in continuous motion and don’t rest permanently. Additionally, there is the particular velocity of particles. At the mean position, the velocity becomes maximum in standing waves, while in progressive waves, velocity is the same throughout even at the mean position.

Motion in the stationery wave is not transferrable, whereas motion in progressive waves is transferrable in a forward direction. Energy is also trapped in a medium while energy is propagated through a medium. Stationery waves don’t partake in forwarding motion, while its crests and troughs blink at the beginning of the position. On the other hand, progressive waves are forward-moving. Therefore the blinks and troughs are also in motion.

What are Stationary Waves?

A stationary wave, also known as a standing wave, refers to a static that remains within the boundaries of a medium and does not travel. Every particle withi9n a wave features different characteristic vibrations.

Energy can also translocate back and forth; however, the average energy will remain zero.

What are Progressive Waves?

Progressive waves refer to waves that travel within a medium with a definite velocity. Therefore, each of the particles within the wave executes a similar vibration.

The amplitude of these particles remains the same while the phases change randomly. Additionally, the particles within the wave also attain maximum velocity once they pass the mean position.

Progressive waves feature a definite energy amount which they carry or transfer.

Difference Between Stationary and Progressive Waves

Well! Know that you have a better understanding of the application and the characteristics of the two waves, you can easily ensure that the two terms link to physics, and they both feature clear definitions and concepts.

While these two waves are not that interesting to the common people, they have little or no significance to their daily lives.

However, they have vital importance to employees working within the musical industries, radio stations, and water generator supplies, among other industries that make use of mechanical waves.

The waves also bear a huge significance to geologists when it comes to understanding the vulnerability of incoming disasters like cyclones, earthquakes, and tsunamis. This helps in making sure they are able to address people and prepare beforehand easily.

Having this knowledge makes sure you get to use these terms wisely.