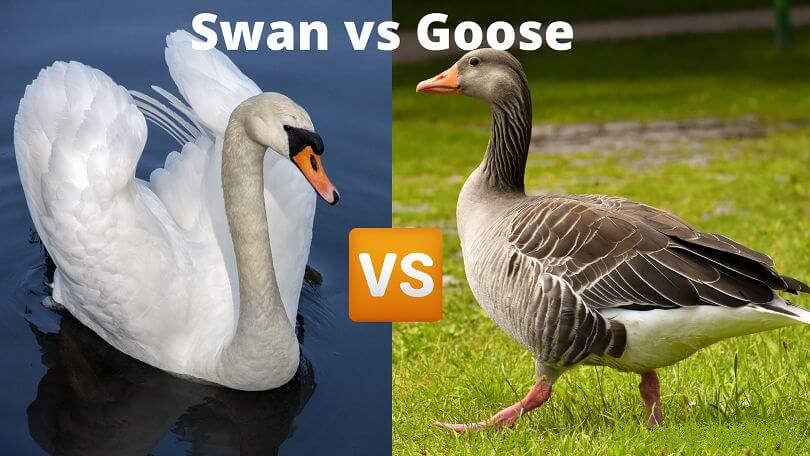 From a single glance, a goose and a swan might seem to be the same. However, when looked at in more detail it is easy to see that they are actually quite different. Both species are aquatic birds and belong to the Anatidae family with an Anserinae subfamily. Both consist of webbed feet and help them move forward at swimming times. However, in approximation, it is pretty interesting that the species of Goose and Swan came out of the ducks.

Even more than twelve million years before, geese and swans separated and underwent evolution separately. Furthermore, they developed subspecies that their distinctive physical appearance can signify.

The significant difference between them is easily noticeable. Also, the swans are much more prominent in length, weight, and wingspan than geese. Swans also consist of the neck, much thinner and longer with a distinct curve-shaped S. On the other hand, geese are smaller and have longer legs compared to the Swan. Also, there are some species that are exceptional cases in this general rule of thumb.

It is a vast aquatic bird and consists of a thin & long neck, feet that are webbed, broad bill along with short legs. Also, it is white with light black spots, and in a few cases, it is entirely black. Swans also bear the broadbills, which function as the teeth to capture the prey, mainly fish, and eat it.

Swans mainly are from the family Anatidae under the category genus Cygnus. The birds developed out of the ducks, especially from the seven species that have become extinct. Coscoroba Swan is also present, but it is not termed the true Swan. Swans are mainly found in chilled or temperate climates. Numerous species from such waterbirds are either partially or fully migratory.

It has a peculiar diet consisting of aquatic vegetation. It survives on mollusks, small fish, frogs, worms, and tiny grass from the land itself. Also, swans browse for food, more in the water as compared to the land. The population of the Swan is between 1.5 to 1.6 million birds under the 7 species.

A swan is also popular to mate once and for its entire life. Such birds are also the most protective of their nests by depicting intraspecific violent behavior when facing any threat. Swans usually do not have many predators because of their huge sizes.

Names like foxes, raccoons, coyotes, and wolves usually hunt for their eggs and also, at times, on the adults.

The term goose is brought into use for the female version of the gander. Geese are the huge-bodied waterfowl and bear a comparatively short neck, small size, and less weight than the Swan. They have webbed feet and short and broadbills. They are called black, gray, or brown, with white patches over the belly and the tail.

Geese are the members who belong to the family Anatidae, just like the swans and Subfamily Anserinae. They are primarily extracted from the ducks to create twenty-two subspecies categorized under variable genera. It is commonly found in the Northern Hemisphere, North America, Asia, and European countries. Talking about its diet, it commonly feeds on the grass, plant stems, leaves, roots, shoots, bulbs, grain, and berries, along with small insects.

Geese can be considered mates to one partner for a lifetime. On the contrary to swans, geese are pretty social. As they are small, they are likely to be on the eye of the hunters such as wolves, coyotes, and massive raptors. There are about 5 million Canadian geese, larger than the 150 lakh Snow-residing Geese. Approximately 2 million geese from Ross’s family, an approximation, 8.5 lakh bean geese.

Although docile in many cases, geese can be highly aggressive some of the time. They tend to vibrate the necks and might attack the enemy while threatened.

Difference Between Goose and Swan

More About Both of Them

As of now, it might be a clear thought delivered that both geese and swans came out from the one bird. Therefore, it might be frustrating to find the difference and make them stand apart. What’s the easiest method to differentiate them? Check out their appearance and know if they are similar or not. It will help you to get the information according to your wish. When we say appearance, it includes noticing size and color as well. A swam usually has a thinner and longer neck with a bulky body and short legs.

Be it Swan or Geese, both the birds can mesmerize your eyes when you see them floating in a lake. But if you want to deliver your kids some basic information during a picnic, make sure you are packed with all the required information. Where will you get it? This write-up is a sincere attempt to highlight the change between the birds and help you get a better sense of knowledge without putting in much effort.

Geese can be commonly observed in public lakes or parks, but swans are not usually found due to their introverted nature. We also hope that you might have found the right set of information to differ between them both in a better manner.