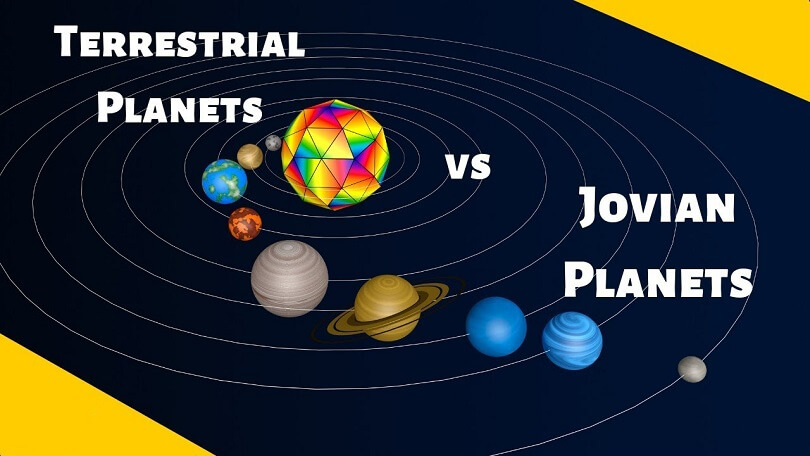 In the universe, there are a lot of different planets and systems. In the Solar System, where Earth is located, there are eight planets and a dwarf planet. However, not many would know that these eight planets are actually further subdivided into two categories which are the Jovian and the Terrestrial planets.

Mercury, Venus, Mars, and Earth are considered terrestrial planets, while Neptune, Saturn, Uranus, and Jupiter are all Jovian planets. Now, the question would be, what would be the difference between Jovian and Terrestrial planets? How do they actually differ from the other? Learning more about what they differ in or how the planets got sorted out into the categories will help you find out more about them.

What do the terrestrial planets have in common to sort them that way? What is with the Jovian planets, and what does Jovian mean? All of the answers to these questions will help you learn more about their differences.

In theory, Terrestrial planets would have the same surface as Earth does as they are both in the same category. They are going to have a metallic core with a lot of different silicate materials. Jovian planets, on the other hand, are mostly filled with gases such as methane, hydrogen, ammonia, and helium. They are planets that have molten rock as their core.

Terrestrial planets have a few moons and are known to have topological features like craters, volcanoes, and some valleys. They are also known to have parts of them covered in water. They are also closely known to have a presence of life such as Earth does, and it is unique. On the other hand, Jovian planets would show the opposite.

What are Terrestrial planets?

Terrestrial planets are also known as telluric planets. Both of them come from the word meaning Earth. It is necessary to understand that the Earth that is being talked about is not the planet we live in, Earth, but rather the nature of the planet, which means that it is solid and has a rocky nature. This is because Terrestrial planets are known to have a rocky surface that is made up of silicate and the metals that are abundant in them. The planets that belong in this category are Earth, Mars, Mercury, and Venus.

Earth is a unique planet, as we all know, as it is the only one that is capable of holding human life. It is a significant planet that has an abundance of oxygen that is needed by human beings to survive. This is also because of its proximity to the Sun, which is not too far but also not too close, enough to have enough sunlight but not too much to burn it.

While the atmosphere of Mercury is not solid, it is because of its proximity to so-called solar winds. Most of the terrestrial planets are those that are near the Sun, and this is also the reason why most of them have rocky surfaces to survive the heat given off by the star.

What are Jovian planets?

Jovian planets are actually meaning to say that it is Jupiter-like. This is because Jupiter is a humongous planet that is filled with gas, and this is the characteristic that differentiates Jovian planets from terrestrial ones. This is in comparison to the size of the Earth. The major gases that are found in Jovian planets are helium and hydrogen, as well as traces of ice and other gases. Their cores are normally solid but also molten rock. They are characterized by their rings, the satellites they have as well as their constitution. They are normally referred to as gas giants. The planets that are categorized as Jovian planets are Jupiter, Neptune, Saturn, and Uranus.

A major characteristic that sets them apart would be that they have a high number of satellites. They also have different types of moons together with them. Also, Jovian planets mostly have rings in them of different sizes, whether they are ice, dust, or boulders. They are also mostly the planets that are far from the Sun and are considered to be the outer part of the solar system.

Difference Between Terrestrial and Jovian planets

Indeed, the Solar System is an interesting mix of different celestial bodies. Within them, there are different classifications, and this would include the terrestrial and the Jovial planets. Understanding more about the Solar system and how each body differs from the other helps in learning more about the universe around us.