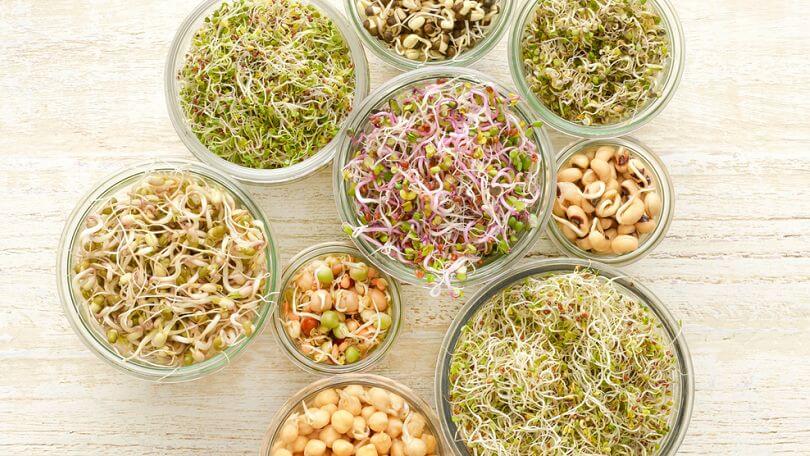 Sprouts are considered as a good breakfast option and a great snack option. This is simply because they offer lots of protein, dietary fibers, minerals, vitamins, and folate, among other nutrition. They also offer lots of health benefits to the body. However, there are different sprouts types, including bean and alfalfa sprouts. For a long time, these two types have been the most favorite sprouts among many people.

Both the two commonly used alfalfa and bean sprouts are very nutritious and can be eaten while still raw. They can also be applied in salads or sandwiches. These two sprout types will arise from their seeds when soaked in water. They also feature different and similar similarities among them.

These two sprout types will have major differences in attributes, crunchiness, appearance, size, pricing, and other factors.

The main difference between alfalfa sprouts and bean sprouts is that the sprouts are way thinner, less crunchy, and more delicate when compared to the thicker bean sprouts, which are very crunchy and also toasty. Apart from being a human-consumed delicacy, alfalfa can also be eaten by livestock and comes at very high prices when compared to bean sprouts.

What are Alfalfa Sprouts?

Alfalfas, also known as Medicago sativa, are leguminous plants that originate from the Fabaceae family. This plant mainly does well in temperate regions and mainly grows as animal fodders. They also feature purple flowers. The root nodules of the plant contain nitrogen-fixing bacteria. On the other side, the alfalfa sprouts are rich in carbs, water content, fibers, vitamins water content, and minerals. They also contain negligible fats.

For germination, the alfalfa seeds are normally put into a container that has water and left to germinate. The sprouting process can take up to 3 or 4 days for proper sprouting. The alfalfa sprouts are very delicate, a reason why they are never cooked. They are therefore consumed as raw and mostly as salads or in sandwiches.

What are Bean Sprouts?

Beans sprouts have gained popularity all over the world. However, they were mostly being used in East Asia. These beans are sprouted in different ways. In countries such as China, Korea, Nepal, Japan, India, and Indonesia, mung bean sprouts are normally used to prepare various cuisines. Therefore, the mung and soya bean sprouts are the two common and widely used bean sprouts.

Mung bean sprouts are toasty and crunchy. Apart from being consumed while raw, they are a bit thicker. However, you can also cook or fry bean sprouts. They are very rich in nutritional value and can minimize chronic illness, facilitate digestion, and help reduce heart disease risk by lowering bad cholesterol levels within the blood. This means that bean sprouts can be very helpful to human health when consumed on a regular basis.

Due to their low-calorie levels and high fiber contents, and a wide variety of health benefits, sprouts have been for a long time the better food choice among many people within the world. Bean and alfalfa sprouts are considered the most common sprouts that humans consume. They are easily distinguishable from one another by simply looking at them.

Both sprouts are considered best for sources for fibers, proteins, minerals, among others. They also both arise from seeds when soaked in water. Alfalfa sprouts will arise from alfalfa seeds, while bean sprouts come from bean seeds.

Alfalfa sprouts are way thinner, more delicate, consume lots of time to sprout, contain fewer proteins, are less crunchy, cannot be cooked, and are used as animal feeds but also consumed by humans. Beans sprout on the same are thicker, cheaper, less delicate, have very high proteins levels, can easily be cooked, and are majorly consumed by humans. They also have a bit of difference in appearance.