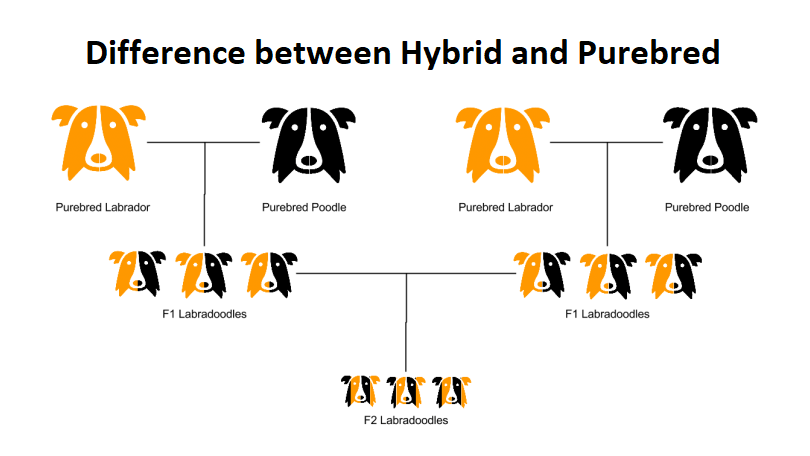 In layman’s language, purebreds are descendants result from mating parents that have similar genetic makeup. On the other hand, hybrids are offspring as a result of mating parents that have different genetic makeup. Breeders have been known to use these terms more often. For one, they refer to hybrid as animals that are a crossbreed of two or more breeds, while purebred means an animal from one particular breed.

Scientifically, genetics are usually defined by the Mendelian Law of Inheritance. The law says that there are different positions that a gene can occupy on a chromosome. The gene will outline the characteristics that the organism will have. The gene will have various expressions and can either be a dominant gene or a recessive gene.

In a nutshell, the concepts explain that organisms will share some traits because of their genetic makeup defined by the number of chromosomes. The chromosomes can either be singular, in pairs, or haploid. So, when similar species mate, they reproduce, and an offspring that is a lot similar to them and are referred to as purebreds. But when different species mate, they produce offspring with a different genetic makeup, popularly known as hybrids.

The primary distinguishing factor between Purebred and Hybrid is that a purebred is a resulting offspring of the same breeds with similar genetic makeup. At the same time, a Hybrid is a resulting offspring of two different animals of the same animal or a cross between two distinguishing animals. Purebreds come from true-breeding, a situation where specimen breeds true-to-type.

The purebred has mandatory features that are replicable, predictable, and consistent. The process can be done in a restricted gene pool which sometimes is a cause for alarm. Positive characteristics are passed down through true-breeding, but the undesirable traits are also not left behind. They become part and parcel of the outcome due to inbreeding.

The restricted gene pool will make purebreds becomes susceptible to various congenital health concerns, especially on aesthetics. On the other hand, a Hybrid is an offspring of two different species. In the animal kingdom, you can cross-breed animals from different species like tigers and lions to get ligers, yaks, and buffalos to get Yakalos, horses, and donkeys to get mules and so forth.

The other type is due to interbreeding sub-species, which can even include intra-specific between subspecies, intergeneric-between genera, and interfamilial hybrids. The third type is due to selective breeding, which is made consistent and enhanced by desirable traits.

Hybrids are organisms that result from cross-breeding two animals or two breeds of similar animals. They have two heterozygous parents, making them have different genes from their parents. They also have two distinguishing alleles for a singular trait.

In layman’s language, hybrids are species that have two different species as their parents. This is usually done to improve the genetic quality of an organism, whether it’s a plant or an animal. The process will induce a specific character into the species.

Hybrids are of different types, and they mostly come from cross-breeding between two organisms of the same animal. But there are other types that you crossbreed between two different subspecies like inter-familial, intra-specific and intergeneric.

On the other hand, Purebred are offspring that have the same genes as their parents. They have homozygous parents plus their genes. It’s only detectable when many generations have similar genes. They can also be referred to as true breeders. Animal breeders use this term to refer to animals that have the same ancestral breed.

The organisms have predictable, repetitive, and fundamental character traits. This makes it easy to find out from their parents. This is done to continue the genetic line of a certain plant or animal. There is a growing concern about the limited gene pool; therefore, creating purebreds seem vital.

Both positive and negative traits are passed down to the offspring. The undesirable trait is caused by conjugation. The offspring can be susceptible to various types of congenital health concerns. The reason for purebred is maintaining the continuation of a certain genetic pool.

Difference between Hybrid and Purebred

Hybrids are offspring of heterozygous parents while purebreds are offspring of homozygous parents popularly known as true breeders. The two have their advantages and disadvantages. For instance, purebreds continue the lineage of species while hybrids improvise on traits. But hybrids have a lot of benefits like heat tolerance, disease resistance among other advantages. Hybrids are a combination of different elements whereas purebreds preserve the original identity.