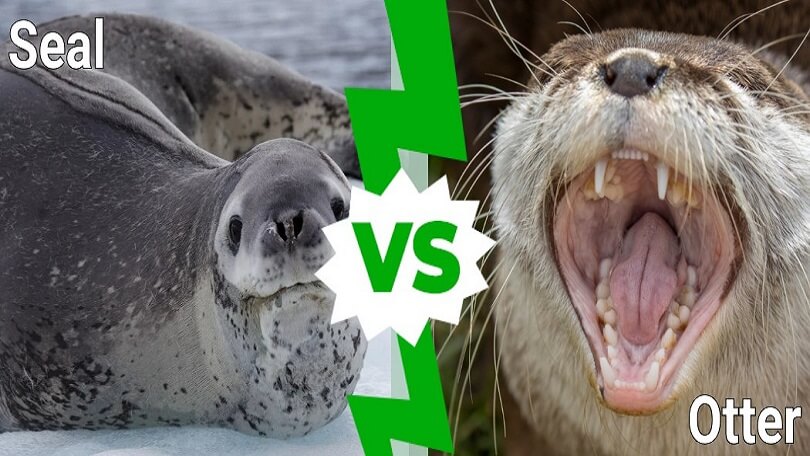 There are many sea animals around the globe with different characteristics and features. Some can be extremely dangerous while others are cute and small. Others are harmless. Two of these species are Otters and Seals. While Sea Otters and Seals have many similarities, such as being mammals, the differences between them are quite extensive. Because of their similar external appearance, many people confuse Otters with seals.

Seals are known for their sleek, slim bodies and flat flippers that are short and wide. Otters, unlike seals, have long, thin bodies and short legs. They have sharp claws and webbed paws that are much more pointed than the seal’s fins. Otters have a soft, insulated, underfur that is protected by a layer of long guard hair.

Seals and otters also have different physical characteristics. Seals spend more time on the land than otters. They also breed and give birth on the land. It is known that Otters mate in the ocean and give birth in the water.

Seals also love fish, which can be seen from their preference for food. Otters, on the other hand, only eat fish very rarely and prefer invertebrates.

Seals have flippers, whereas otters have paws. While otters have visible external ears, seals don’t have them. The swimming abilities of seals and otters are comparable. Because they have flippers, and a sleek body, this is why they are considered to be good swimmers. Seals, unlike otters, are known to lay on beaches and rocky islands.

Otter and Seal are different because Otter is from the Mustelidae, while a seal comes from the Phocidae. Despite being mammals, both belong to different families, they produce milk and give birth.

The way they keep themselves warm is a major difference. While Otters use their thick fur to keep warm, Seals have a blubber layer in their skin. You will find many differences in their habits, physiques, and features.

Sea Otters are mammals that live in the oceans and seas around the eastern north and northern Pacific Oceans. Sea Otters are the largest of the Weasel marine animals, weighing in at around 14 to 45 kilograms when fully grown.

They don’t have blubber underneath their skin, unlike other marine mammals. To protect themselves from the cold, they have a thick layer of fur on their bodies. This fur layer is among the thickest in all of the animal kingdoms. Although they can walk, they prefer to live in the oceans.

Below is the Scientific classification for the Otter:

Sea Otters were extensively hunted for their fur quality from approximately 1700 to 1900, which coincided with a dramatic drop in their population. The international ban on their hunting via different programs led to their exclusion. Although it is the smallest of marine creatures, it is also the heaviest in the Mustelidae family.

Pinnipeds are the common name for seals. These carnivorous animals are widely distributed and varied. The total number of Seal species is 33. From the fossils, however, there are 50 more species.

Seals can weigh anywhere from 45kg (Baikal Seal) to 3200 kg (Southern Elephant Seal). Sexual Dimorphism is a common trait in many species of Seals. Because of their four limbs, and their streamlined bodies, Seals can be very agile and flexible. These limbs can be modified to make flippers.

Below is the Scientific Classification of Seals:

Many species of Seals excel at diving in deep oceans. The fat layer (also known as blubber) that seals have under their skin keeps them warm in the cold water. The land is where seals mate and give birth. They also visit the land to escape predators and hunters like sharks.

The Arctic’s indigenous people use the fur, meat, and blubber of the Seals to hunt them. Sometimes they are trained to do various tricks and tasks, but most of them are kept in captivity. These animals were once subject to brutal hunting, but they are now protected by international law.

Differences between Otter and Seal

Many adaptations are shared by seals and otters. Both are marine mammals with lungs. Both Otters and Seals are protected by the Marine Mammal Protection Act. It is against the law to harass or capture them.

There are a variety of traits, behaviors, and characteristics that distinguish these marine animals. The Seals are the best swimmers due to their sleek bodies and flippers.