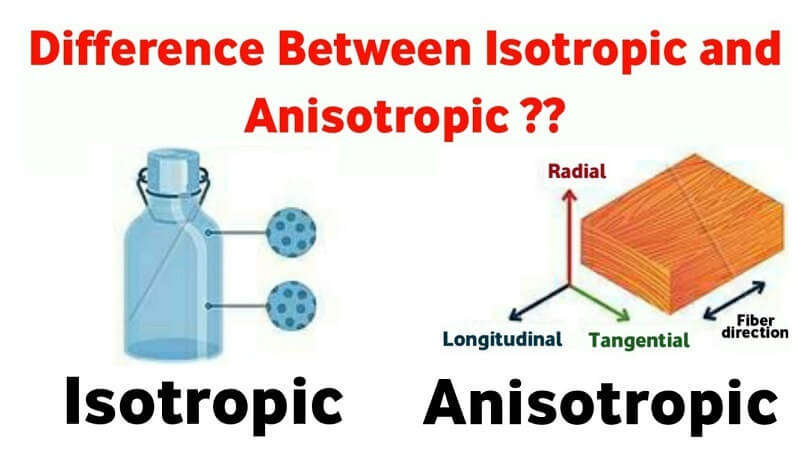 When it comes to minerals, they are often characterized as a solid compound or combination of compounds that may be distinguished based on the types of compositions that are present in them. The qualities of these minerals are also specified by the composition of the minerals that they are composed of.

Isotropic mineral crystals are those that have qualities that are consistent and constant across the whole substance. This is due to the fact that they have the same composition throughout and are not affected by direction or dimension.

Anisotropic mineral crystals are those that have varied characteristics depending on the direction the mineral surface is seen from. The difference in composition is responsible for the differences in attributes. The qualities of such minerals are determined by the direction and dimension in which they are found. Double refraction is one of the features that they show.

What exactly is isotropic?

In this case, it may be inferred from the fact that chemical bonding is consistent across the mineral crystal since they all have the same composition. Because light is unable to pass through certain minerals, when light is shone on them, they seem to be very black in appearance.

The term “isotropic” comes from the Greek language. It derives from two Greek words: “iso” which means equal, and “tropic” which means direction, which combines to form the term. As a result, it is possible to conclude that isotropic implies equality in all directions.

Many different sectors make use of isotropic materials. They may be found mostly in industries that are linked to mathematics, physics, biology, and chemistry.

What exactly is anisotropic?

Anisotropic crystals are crystalline solids characterized by a varied and non-uniform composition and set of physical and chemical characteristics. As a result, the characteristics of anisotropic minerals are determined by the direction and size of the crystal.

Additionally, anisotropic materials have uneven and variable chemical bonding in each direction, which is due to the fact that their characteristics change with direction. Light can readily pass through this substance, and as a result, when bright is shined on them, they seem to be light in color.

The term “anisotropic” comes from the Greek language as well. It is derived from the terms “an” and “isotropic”, which indicate opposed and equal in all directions, respectively, in the English language. Consequently, one may deduce that anisotropic implies different in all directions since it is the polar opposite of isotropic, as shown above.

It is possible to get various qualities from anisotropic materials that are not available from isotropic materials. Double refraction, dichroism, optical activity, and other phenomena are examples. This is due to the fact that they have varying refractive indices in various directions, and they are also utilized in disciplines that are comparable to those of isotropic materials, such as optics.

Difference between Isotropic and Anisotropic

Isotropic crystals are those that exhibit qualities that are consistent and equal over the material’s whole length. Anisotropic, on the other hand, is the polar opposite. This material exhibits a variety of characteristics when seen from various angles. Essentially, this is the primary point of differentiation between the two minerals.

Isotropic minerals exhibit constant qualities over their whole length, regardless of the orientation or size of the crystals in them. Anisotropic materials, on the other hand, are depending on the direction and dimension of the mineral crystal, resulting in a wide range of characteristics in various directions and dimensions of the mineral crystal.