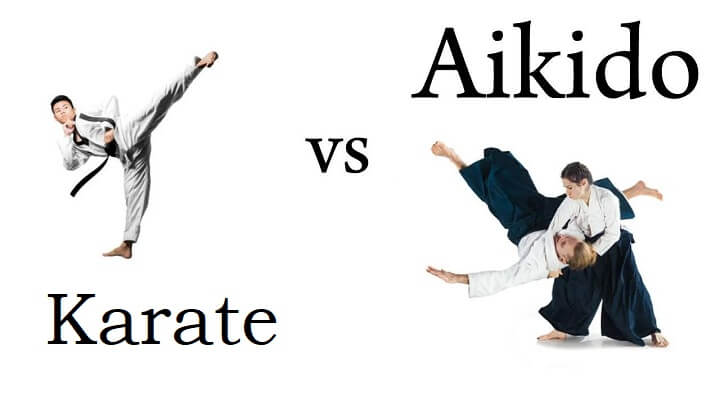 There are various kinds of martial arts practiced around the globe. But the most commonly practiced among them is Aikido and Karate. Even though they are different forms of martial arts, they have a lot of similarities that beg the question: how different is Aikido to Karate? Well, to get a better understanding to this question this piece tries to set the difference and similarities that both techniques hold.

Aikido and karate share the same techniques. The martial arts technique follows circular, rectangular, and triangular motions. The students are taught differently when it comes to practicing the art, but they learn similar techniques.

The strategies and fighting capabilities incorporated in both martial arts mirror each other. A student’s first lesson in a karate or aikido class is controlling their opponents with movement. It can be one motion or a combination of movements depending on the levels of the class.

Aikido is a famous martial art formed by MoriheiUeshiba. It originated from Japan. The art streamlines peace, self-defense, and harmony. It has been proven that aikido provides a psychological and physical balance to a person practicing.

The main reason for aikido movements is not to fight but to manage a violent situation or aggressor. You will be surprised when you hear your teacher condemning the violence during such a class. It’s that serious, as the art doesn’t condone violence. They teach you self-defense by using the weight of your aggressor against them.

For you to do this move effectively, you must learn how to discern your opponent’s move. You must know the direction the attack is coming from. You will have to use your attacker’s momentum and use it to defeat him. The good thing with Aikido is the fact that a small person can easily defeat even the hugest of persons with so much ease. This is the reason why it is preferred by many.

It originated from Ryukyu, now modern Japan, and it has become a fan favorite as many people are drawn to and learn it. It was founded by Sakukawa Kanga, ItosuAnkō, Matsumura Sōkon, ArakakiSeishō, and HigaonnaKanryō. It involves punching, elbow strikes, knee strikes, and kicking to take down an aggressor.

The martial art has various styles and techniques. You will be able to use kata and various postures to defeat an opponent. The kata can either be offensive or defensive. As a student, you will first learn how to channel all your power in your punches and kicks. So when you try to use them against your opponent, he can feel their impact.

The modern and evolving karate will have you strike and practice restraint, joint locks, and grappling.

Difference between Aikido and Karate

Karate and aikido are martial arts that have roots in Japan. When you compare karate to aid iko, you’ll find that aikido is a newer form of martial arts. Karate is considered a hard art, while aikido is a soft martial art. Since it is a hard martial art, it uses kicking, punching, and striking as their main techniques.

Aikido is a delicate art and will use grappling throws and holds to defend yourself against an opponent. Since aikido is a soft martial art, most people think that it uses passive techniques, but this is far from the truth. It is among the most dangerous martial arts.

The main focus of aikido is self-defense and managing aggression or violence, while karate focuses on self-defense together with attacking and striking an opponent. As much as they are both unique defensive techniques, practicing these moves also comes with health benefits to the body. This is attributed to the fact that the training entails lots of heavy exercises.