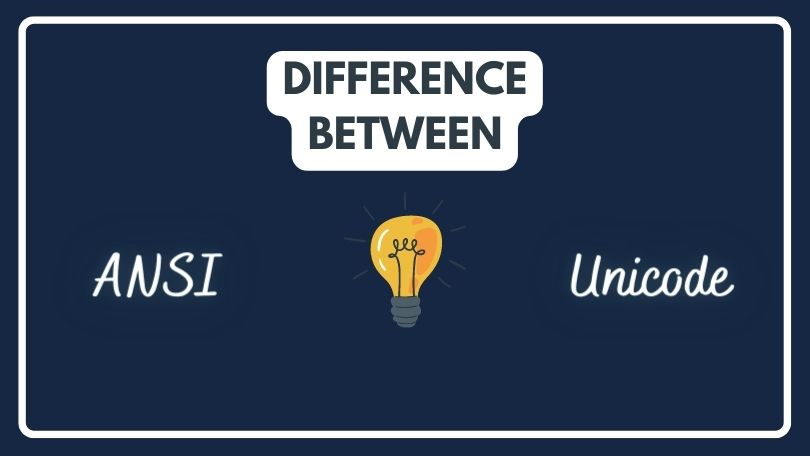 ANSI is a much older character encoding standard, whereas Unicode is a more recent standard that is integrated into most modern operating systems. It is not possible to utilize Unicodes on earlier systems since they were developed for the current and widely used versions.

A considerably earlier type of encoding, ANSI is the standard code page used in operating systems like Windows. It’s a 7-bit extension of ASCII, while ANSI contains an extra 128 character codes and is an 8-bit standard. The American National Standards Institute (ANSI) is known by the abbreviation ANSI.

Contrary to ANSI, the character encoding scheme used by Unicode has a predetermined length. Current operating systems employ Unicode, which is a modern encoding standard. All commonly spoken languages throughout the globe utilize the encoding character scheme. Based on the encoding scheme, 8-bit and 16-bit encodings are utilized.

ANSI is used in earlier operating systems, such as Windows 95/98. Older and current standards alike make use of this coding technique. The ANSI encoding scheme has a drawback in that it requires various platforms for different languages. Western European Latin is the encoding page used for English.

ANSI’s accommodating feature is restricted since it can only express each code using 8 bits. As a result, there are only roughly 256 possible combinations of letters that may be used in a single line. It can be used on both current and older versions of Windows thanks to its ability to convert ANSI characters to Unicode.

The mechanisms of ANSI programs are slower. To encode and convert characters, you use this Microsoft-related format. An encoding process may be used to format and convert unreadable formats to readable ones. The encoding procedure includes more than 128 languages.

Fixed and variable widths are both available in Unicode. It is the most extensively used encoding standard at the moment. Its encoding standard platforms are quicker than ANSI’s. The 16-bit encoding scheme is the default. A hexadecimal point is utilized in the code. All languages can be encoded into it since it includes 65000 code components that may be used in any language.

Unicode has the ability to convert non-Unicode databases into Unicode formats. Unicode encoding systems provide a wide range of data formats. It has a maximum character coding point limit of 32-bits. There are now 159 encoding scripts in use. In the encoding process, it covers the vast majority of scripts.

Difference Between ANSI and Unicode

Coding characters for different languages, from unreadable to legible, is done using ANSI and Unicode standards, respectively. In contrast to ANSI, which is 8-bits, Unicode is 16-bits or even 32-bits and is used to encode more than a million characters.

It’s worth noting that operating systems now use Unicode rather than an earlier ANSI-based encoding standard. It is utilized in both newer and older operating systems since it can convert ANSI characters into Unicode characters. A single platform, called Unicode, is used to encode all languages throughout the globe in the same way ANSI is used in different systems.