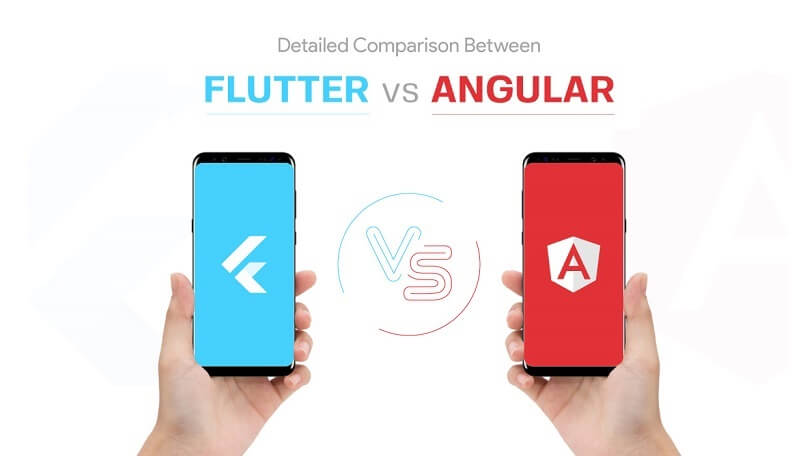 Google develops both Flutter and Angular but comes with many differences. The two are UI software but are written in different languages. To create applications, flutter uses DART and C languages while Angular uses HTML ad typescript for the same job. The main purpose regardless of the difference is to ensure that client expectations have been met. They are both open-source frameworks that target different demographics.

The beauty of technology is that it will keep changing and it will keep growing. More computer languages continue to be built to enhance the building and creation of more applications by web developers. What to look out for is the languages you intend to use for your work. Performance is becoming a key component and it is therefore important to choose computer languages that work best.

The difference between Flutter and Angular is the writing platforms that they both work on. Angular, compared to Flutter works at a more slow-paced motion

Flutter is a single system-based language. It uses different components to make an application. Due to the ongoing developments happening with the language current, it is unstable. It has great execution and continues to be used widely by web developers.

Angular on the other hand creates its applications using HTML and Javascript languages. This gives it an upper hand in stability, compared to Flutter. It uses six components to successfully build its applications. Angular contains stability and excellent framework results which are the two features that give it great recognition.

Comparison between Flutter and Angular

Flutter is a cross-platform framework that targets Android, iOs, Desktop, and Web platforms. It has four major components it uses to create its applications. These components include; Dart, Flutter Engine, Foundation Library, and Flutter Devtools. All sorts of applications on flutter are created on DART. The Dart Developer Summit, which was Flutter’s first version, was unveiled in 2015.

Flutter is still changing to give room for a more stable platform for its users. Its applications increase in performance through the help of its design-specific widgets. The primary language used by Flutter is C++ with the help of Skia Graphic Engine from Google.

Angular is a front-end framework of the web. It uses general HTML structure and typescript language to create its applications. It is more stable in its functionality compared to Flutter. Components used to create applications in angular include; Data Binding, Type Components, Provider Components among others.

Engineers who created Angular had the developers’ interests in mind. Google Voice, Google Transparent Reports, Google Open Source, Messages, and Keen are all made from Angular frameworks.

The advantage of Angular is that it is quite easy to understand. It was written in 2012 and Google introduced it into the market. Some modifications were done to it which gave developers room to invent their own HTML tags.

Difference between Flutter and Angular

In conclusion, Flutter and Angular are two complete languages right from their inception by Google. Flutter is still undergoing more developments to increase its performance and stability. Angular on the other hand due to its stability has made itself recognized and more preferred by developers.

While Angular seems to currently be ahead of Flutter, Flutter is meant to catch up in no time. It is easier to use and is currently only a bit slow because of the developments it is currently undergoing.

They are both programs owned by Google but use different components to create their applications. They both have a huge database which is the reason they have become building blocks for Android and iOs applications.

People are looking forward to Android and iOs applications that are seamless when using. Fast installations and downloads as well as Applications that can generate great returns. As such, Flutter will need to keep being developed until it can function with full stability as Angular.