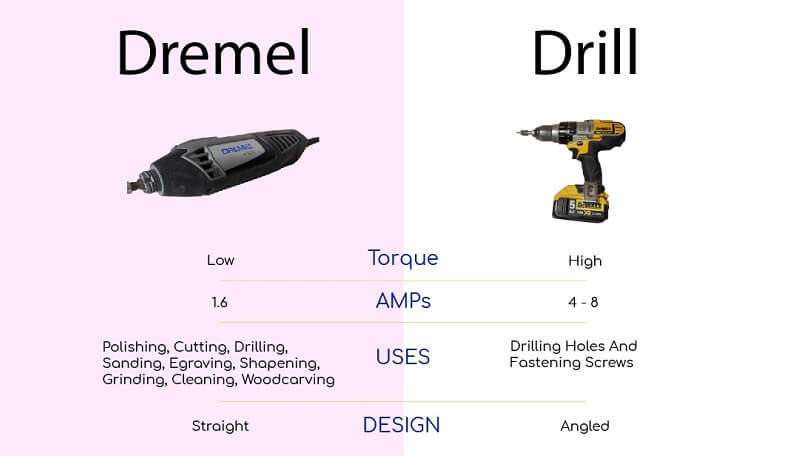 Hardware tools come in many different types and varieties that are necessary to use in the household. Whether or not someone is well versed in using the tools, it is important to find the ones that are compatible with the type of work they are going to do so that they are able to get a lot of work done.

Tools can be quite confusing to use, especially if you happen to be a beginner. A Drill and a Dremel tend to have the same working mechanism and are both often used as hardware tools. Knowing their differences will help you choosing which one is more appropriate for the task.

The main difference between a Dremel and a drill would be that Dremel is a brand that has a lot of different tools, while a drill is a type of tool coined as hardware. The torque of a Dremel tool is also much larger than a drill for at least 20 times more. On the other hand, only the drill is able to do specific tasks such as drill a hole or drive a screw as Dremel tools are not able to do it. In general, Dremel tools are able to perform a wider variety of functions around the house, while a drill can only do limited tasks.

What is a Dremel?

Dremel tools are a kind of power tool that is used for different chores around the house or the office, depending on the situation. They have a lot of rotary tools available, which means that the tools can rotate at a high sped and are able to produce a great amount of torque, allowing them to be very useful.

Compared to a drill, Dremel tools are smaller in size but produce a larger amount of torque and come with higher speed. Dremel tools come with a lot of different functions, which include engraving, polishing, grinding, sanding, and more. They are designed to produce power that is perpendicular to the drive shaft.

Dremel tools are speed-based versus being power-based, and they perform their functions at high speeds. It includes a lot of different jobs such as the ones mentioned before. At the same time, they are not good for functions that include a lot of power, such as driving a screw and drilling a hole.

What is a Drill?

A drill is a powerful hardware tool that is also considered to be a rotary tool. Its main functions include drilling a hole and driving screws. It is a larger tool compared to the Dremel tools, and its handle makes up for the majority of its size. It has an RPM of 1500, which is much slower than the Dremel tools.

The drill is known as a power-based tool, and thus it is helpful for tasks that need a lot of power, like driving a screw and drilling a hole. However, when it comes to tasks that require a lot of speed, it can be pretty useless. There are a lot of different types of drills, and the most famous ones are handheld drills and cordless drills.

Cordless drills are very convenient to use since they can pretty much be brought anywhere; although most drills are very heavy in terms of size, that is mostly because they are used as power tools. They are designed in a way that would put their forces parallel to the drive shaft. They are also considered to be much pricier than the Dremel tools. It is a very useful tool that is mostly used for both household uses and office uses.

Difference between Dremel and Drill

Both Dremel tools and drills are hardware tools that can be used for different functions. Though they both work in the same way, their mechanisms are different from each other as Dremel tools are speed based whereas drills are power-based tools. Learning how each function helps you to figure out which you need for the task you have.