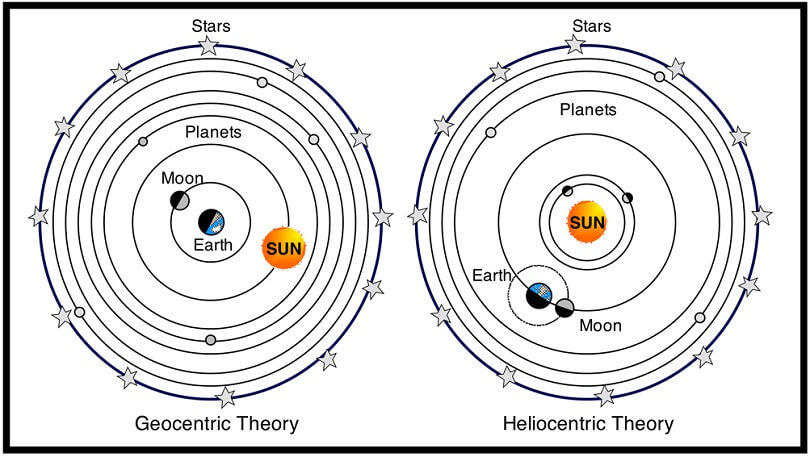 The universe has always been a subject of curiosity dating from Babylonians, Greeks, Egyptians, and the Indus. They build stories around celestial’s bodies to explain this phenomenon and their occurrence, while others believe them to be gods. It was until a later date that proper logical theories and scientific explanations were created to explain the arrangement of the universe.

Astrophysics has theories or models that scientifically try to explain the occurrence of the sun and the behaviors of various planets in the universe. They include the geocentric model and the heliocentric model. These models stem from the same root but have various distinguishing factors.

The difference between these two models is from the arrangement of the universe, including the solar system. In the geocentric model, it is assumed that the earth is at the center of other celestial bodies, and they rotated around it. The naked eye initially observed it. It was thought that the heavenly bodies were always seen as moving.

For instance, a celestial body’s sun rose from the east and set in the west. The earth, on the other hand, was stationary. This concluded that the heavenly bodies circle the globe.

On the other hand, the heliocentric model was proposed in the 3rd century but was quickly written off due to a lack of proof. It was then reconsidered during the renaissance era. Nicholaus Copernicus, a known mathematician, and a cleric explained that the sun was in the middle of other celestial bodies that rotate around it. The earth was among other planets that circled the sun.

The moon also moved around the earth. This theory changed the view of religious beliefs during that era.

This is the most predominant theory of celestial bodies. It stems from ancient times when they used the naked eye to observe. The Greeks were strong supporters of this theory, notably Aristotle and Ptolemy. The view lasted for more than 2000 years before a new approach emerged.

The ancient philosophers further stated that the earth is spherical and does not have a flat surface. The other celestial bodies like the stars, moon, and planets circularly surround the world and move along in this arrangement. The moon would first come, followed by the sun, and then other planets, stars, and steroids.

The theory that the sun is at the center of the universe first emerged in Medieval Greek. Philosopher Aristarchus of Samos first proposed it in the 3rd century. People didn’t take him seriously because there was not enough proof to back up his claims.

During the renaissance era, Nicholaus Copernicus, a mathematician, and a catholic cleric proposed a mathematical model explaining the movement of heavenly bodies. The theory suggests that the sun is at the center of the universe. All planets moved around the sun with other additional celestial bodies. The moon, on the other hand, was moving around the earth.

The theory opened doors to other revolutionary approaches from personalities like Johannes Kepler and Galileo Galilei, who suggested that elliptical orbits can be seen through a telescope. After a series of research from scholars and scientists, they indicated that the sun is not at the center of the universe. It is only at the center of the solar system.

Difference Between Geocentric and Heliocentric

The two theories are fundamental in astrophysics. They were proposed to help understand the sky’s function and the universe. They are similar in trying to explain the universe, but their explanations of the cosmos world are very different.

You will notice that the two models differ regarding function, characteristics, properties they possess, and assumptions. If you are trying to pursue a career in astrophysics, it’s equally essential to know the basics of geocentric and heliocentric models.